From ‘General Butt Naked’ to evangelist

A preacher who used to be one of the most feared warlords in Liberia was in Cape Town recently to launch his book ”The Redemption of an African warlord: the Joshua Blahyi story’

Joshua Milton Blahyi’s story is like a modern day conversion from Saul to Paul. He participated in his first child sacrifice at the age of 11 during his initiation as a tribal priest. Under demonic influence he went on to sacrifice many men, women and babies and to participate in acts of cannibalism. He forced children to abandon their families and fight with him and he became known as ‘General Butt Naked’ because he fought and killed while he was naked. His child soldiers also went into battle with nothing but their shoes and guns. Blahyi confesses to killing 20 000 people during Liberia’s 14-year civil war. 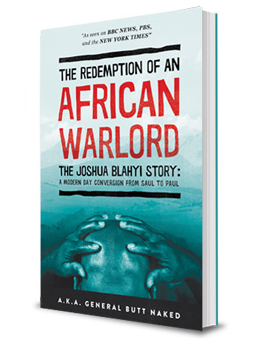 Blahyi’s chilling orgy of violence continued until the day he met Jesus in a dramatic encounter in 1996 during one of the most brutal fights in the history of the Liberian war. Jesus appeared to him as a blinding light and told him that he would die unless he repented of his sins. Accepting Christ and asking forgiveness for his sins, Blahyi promptly laid down his weapons, left behind his soldiers, and went to a refugee camp in Ghana where he began his conversion process. Later he returned to Liberia and confessed his crimes to the nation’s Truth and Reconciliation Commission which granted him amnesty.

“Since that day [of his conversion] Joshua is a changed man. He is the president of End Time Train Evangelistic Ministries in Liberia and his mission now is to reach out to others under evil’s delusions and reform the lives of his former soldiers, enemies of Jesus Christ, and anyone in need of hope and love,” says a media release by Cape Town Christian Production House, Media Village, which hosted Blahyi’s book launch on June 5.

“We had the privilege of hosting Joshua and of hearing him share his powerful testimony of God’s love and grace and about his book at the launch. There was a large crowd and many people were inspired and bought his book. Pastor Joshua is now heading back to Liberia, having had a successful trip to South Africa, where he will continue his work with the ministry in Liberia,” says Media Village.

Blahyi’s incredible story has been told in documentaries on PBS, CNN, BBC, and other media including the New York Times. His book can be purchased online