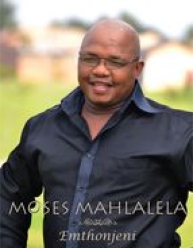 If you are a fan of African traditional gospel music then Moses Mahlalela’s offering Emthonjeni is an album you would want to listen to. The instrument backing on the first song “Khomani Vangeri” can initially give you the impression that this is a reggae album but this arrangement shows the versatility of the band that accompanied Moses on this project. The sure thing that happens when listening to the album is that it is difficult to do so without the temptation to tap your foot or move your head in appreciation of the dance tunes. Most of the songs have this dance-to-the-song beat and yet embedded within them is a message of encouragement and appreciation of God’s goodness.

On the technical side the album checks all the boxes regarding backing vocals, instrument accompaniment, mixing, etc.
The down side for me is that this project does not offer anything new from what is already out there in the market in this genre. The sound and songs are too familiar but then again these sorts of projects are also meant to have that sing-along feel. Even though Moses has done a lot of clever arranging a listener is not left unconnected with the songs. In fact, while listening I had an idea of a tent revival meeting in some township somewhere and people dancing and praising the Lord. I would think Moses connects easily with people in that setting. Let us see what Moses Mahlalela comes up with on his next album.