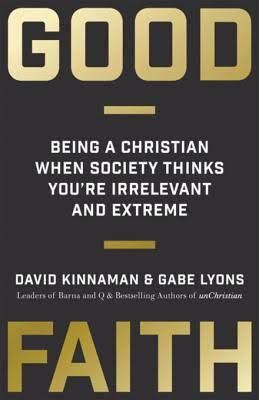 More and more people today believe that Christianity is “irrelevant” and “extreme”, say the authors of this book. Society is not only moving away from a Christian worldview but it is becoming antagonistic towards Christianity. They say the cultural shift is being felt in tangible ways as Christians face mounting opposition to living out their faith in the public square. These statements are not just the authors’ perceptions: they are based on probing interviews with thousands of adults and faith leaders. The authors are David Kinnaman, president of Barna Group, a highly respected research organisation focusing on faith issues and trends and Gabe Lyons, founder of Q, a Christian think tank. So their findings carry weight and although their research was conducted in America, the cultural trends they describe are relevant to South Africa and western nations where increasingly pluralistic societies are challenging Christian values.But as the “Good Faith” in the title of the book suggests, the authors are not merely bearers of bad news.

“We see extraordinary opportunities for Christians to lead our culture today in a fresh and compelling way,” they say.

The authors who have previously collaborated on a best selling book, unChristian, approach their topical and weighty theme with thoughtfulness and wisdom backed by relevant data and some interesting accounts of personal encounters with heavyweight culture-influencers like President Barrack Obama and Oprah, as well as inspiring reports of Christians who are blessing society and influencing the culture in their spheres of influence.

They set out to address the questions:
What does the future hold for people of faith when people perceive that Christians are irrelevant and extreme?
In what ways can faith be a force for good in society?
How can people of faith contribute to a world that, more and more, believes religion is bad?

Central to their hopeful thesis is the concept of “good faith Christians” who hold firmly to biblical truth while loving their neighbours well and living as agents of God’s reconciliation through Christ in whatever area He has called them to inhabit.

Self-fulfillment
In today’s culture God’s moral code has been replaced with a code of self-fulfillment that profoundly impacts marriage, parenting and many other areas of society, they write. The code of self is bolstered by the introduction of new laws and an ethos of “fake tolerance” that says something like “We will tolerate you as long as your opinion falls within the range of what we deem acceptable”. But if you diverge from society’s groupthink on various matters you are a bigot or extremist, say the authors.

Christians will not always agree on how to live orthodox belief, say the authors. Hence we need grace to allow for differences of opinion and how the Spirit leads each of us to love our neighbour.

In addition to offering individual believers tools for engaging constructively with the culture, the final section of the book looks at the role of the church in shaping the future. Good faith churches are “firm with soft edges” — holding to biblical truth but not seeing people in the culture as problems but as people that Jesus loves and who have real hurts, hopes and needs.