[notice]TARYN HODGSON of Africa Christian Action reports on an evangelistic outreach to Lady Gaga fans outside the Cape Town Stadium yesterday.[/notice]
As thousands of Gaga fans descended on Cape Town Stadium yesterday (December, 3), an Outreach Team of 35 people from Christian Action Network, Concerned Young People and Christians for Truth were there to meet them with a friendly smile and a question: “Did you get one of these?”

This question proved effective as many thought they were missing out on something important. And they are! They are missing out on the Good News of our Lord and Saviour Jesus Christ, trying to fill themselves with entertainment that only leaves them feeling empty and dissatisfied, when Christ offers them Living Water.

Tailor-made tract
Fans were offered a tract entitled “Going Gaga? Here’s What to Expect…” which used some of Gaga’s lyrics to springboard into a Gospel message. We distributed 6 000 of these and hundreds of other tracts.

Some were hostile, swore at the team members, and tore up the tracts, but others could be seen sitting on the grass in groups, reading and discussing the contents. Some were even grateful and thanked us. The Outreach Team also conducted 26 Music and Your Spiritual Beliefs Surveys with concert-goers. The Surveys, based on Evangelism Explosion and Way of the Master questions, drew the participants into a Gospel discussion, using the Law of God as the schoolmaster that leads us to Christ. Many evangelistic discussions ensued. 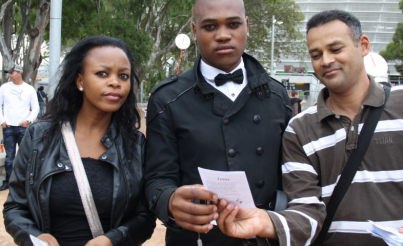 Many fans were dressed with pink wigs, and horns, some had skulls painted on their faces, copying Gaga’s “Born This Way” music video. Some had coke tins and cigarette boxes in their hairdos. Many wore fishnet stockings, thick lightning bolt make-up across their faces and various tattoos.

Gaga recently started an organisation called the Born this Way Foundation ostensibly to “empower youth with self-confidence, well-being, anti-bullying, mentoring and career development”. It was evident from the numerous homosexuals present at the concert that she particularly appeals to them, some for her outlandish exhibitionism, and others because they believe that she “understands” them. It is also probable that some feel that their immoral lifestyle is validated by the “born this way” message. We listened politely to their concerns and challenged them that through Christ, they can be born-again.

We are grateful for the fact that Lady Gaga drew together thousands of non-Christians in one place for us to minister to.

We were reminded of how Jesus had compassion on the crowds because they were “harassed and helpless, like sheep without a shepherd” (Matthew 9:36).

Christians ignorant
We were particularly concerned that numerous people that we spoke to claimed to be Christians. Some were totally ignorant of how blasphemous and immoral Gaga’s shows are.

Parents who were bringing small children, dressed up like Lady Gaga to the concert, should be ashamed of their child abuse.

The ignorance of the Gospel demonstrated by those who claimed to be Christians is indicative of the lack of Biblical Gospel teaching in many churches. There also needs to be a call for discernment in music choices. Pastors, parents and youth leaders need to be warning the youth of the dangers of secular music and discipling them in a Biblical Worldview.”

“See then that you walk circumspectly, not as fools but as wise, redeeming the time because the days are evil. Therefore do not be unwise, but understand what the Will of the Lord is. And do not be drunk with wine in which is dissipation, but be filled with the Spirit, speaking to one another in Psalms and hymns and spiritual songs, singing and making melody in your heart to the Lord, giving thanks always for all things to God the Father in the Name of our Lord Jesus Christ.” Ephesians 5:15-20

“And do not be conformed to this world, but be transformed by the renewing of your mind that you may prove what is that good and acceptable and perfect Will of God.” Romans 12:2 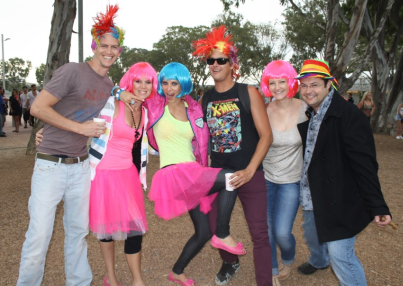