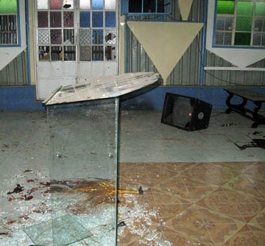 NAIROBI, Kenya — A grenade explosion on Sunday killed a 27-year-old university student at a church in Nairobi and injured 16 people, sources said.

Kelvin Walumba was killed after a man pretending to be a worshipper at God’s House of Miracles International Church in the Ngara area of Nairobi threw three grenades as the service was concluding; only one of the grenades exploded. A security guard said the assailant, who after running out into the street fired three pistol shots into the air, appeared to be of Somali origin.

Islamic extremists from al Shabaab rebels in Somalia have embarked on a series of attacks in Kenya after the Kenyan military invaded Somali territory last fall in an attempt to quell al Shabaab violence at Kenyan tourist destinations.

Speculation that the attack stemmed from a land dispute appeared to be untrue, as the dispute with the church was resolved in court last year, a church leader told Compass.

Another church security guard said that the assailant who arrived at the service was easily noticed because he sat in an area usually reserved for the church music team.

“As the worship was going on, he looked uncomfortable and always looked down,” said the guard, whose name was withheld for security reasons. “He threw three hand grenades and only one exploded. He took off, and he fired in the air three gunshots.”

Joshua Mulinge, the senior pastor of the 500-member church, which has four pastors, was traveling in Zambia at the time of the blast. The preacher for the day was pastor Josephine Mwangale, who sustained slight injuries.

A Sunday school teacher said one of her students, a boy identified only as Jessy, was receiving hospital treatment for injuries and is in stable condition.

A choir member from the church today told Compass said she had just come back to the site to see the aftermath of the attack.

“Last night I did not sleep,” she said.

Commissioner of Police Eric Kiraithe reportedly said that some worshipers tried to pursue the assailant but he managed to get away. Kalonzo Musyoka, the vice president of Kenya, reportedly condemned the attack, saying worship places must be respected and that such an action was unacceptable. He termed it an act of terrorism.

The director of the Criminal Investigations Department, Ndegwa Muhoro, reportedly said that investigations had begun.

The explosion comes a week after the US Embassy in Kenya issued a possible terror attack warning. It also comes less than a month after similar explosion took place in Mtwapa, claiming one life and injuring more than 30.