The idea and every detail of a Christian board game that was launched in South Africa in March was downloaded to him by God, said the game creator Garth Wilson, 38 of Randburg, Johannesburg.

He said the game, which he was told “under the anointing” to call It is Written, was given to him by God after he resigned his well-paid corporate job in obedience to a divine prompting, gave away tens of thousands of rands to Christian ministries, and went on a three-day fast.

In a testimony shared with Gateway News he said that after his bold resignation in which he told his former employers he had been called by God, he started panicking, wondering how he was going to survive with no job and no money.

God then led him into a three day fast, which he failed to maintain during the second day. But he started the fast again and on the day he completed it the Lord “visited me” and “gave me the game” which is played on 40 squares and takes players on a journey in which they encounter the promises of God, pray, worship and share testimonies

God not only gave him the vision for the game, but also gave him the provision, by sending a “sower” to put more than R150 000 into the development of the game and to take care of his rent and food until the game was launched. He said God then removed the “sower”as he was becoming dependent on him instead of the Lord. 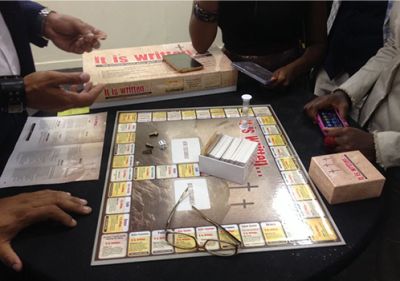 It is Written was launched at the Rhema Awakening Conference in March where it was well-received. This led to an invitation to present at the Vessels of Worth Conference at the end of March and a partnership with The Christian News. Wilson was also invited to show the game at the Global Business Round Table and there is interest from book shops in South Africa and abroad — just to mention a few of the doors that are opening for the project.

Wilson’s renewed connection with God and strong sense of calling are in stark contrast to where he was two years ago when he had given up on life after his marriage ended in divorce. He was a back-slidden Christian, angry with God, smoking, drinking and had reached a point where he wanted to commit suicide.

“I immediately felt something break inside me and actually saw myself in front of God with no answer. That changed my course. So when I went home I started walking around the lounge praying in tongues and cancelled that spirit of death over my life,” said Wilson.

Wilson then started to “look up”, developing a passion for bible study, attending church, prayer and Christian fellowship. He received a number of encouraging prophetic words about his destiny and purpose and received inner healing from childhood wounds relating to fatherlessness, abuse and rebellion. He also secured a well-paid corporate job and started a prayer group at work.

He is fired up about what God has in store for It is Written and says his vision is for it to be on the dining room table in every home with family and friends fellowshiping with love and laughter.

The game can be ordered from Wilson’s website www.itiswritten.co.za  and he can be contacted at games@numega.co.za