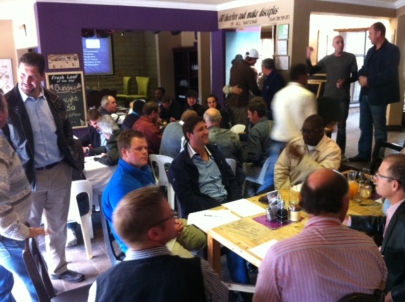 At first glance the House Of Bread in Bloemfontein looks like a regular restaurant but look a little closer and you discover that it is a place that God is using to bring unity and fresh life into the Church in the city.

“There are people from about 20 denominations here at the moment,” says the owner, Andre Venter, as I chatted to him in his restaurant this week. He says his goal is to use good food and entertainment to disciple people and break down the walls of division in Bloemfontein churches.

Clearly, in the four months since the House Of Bread opened it has become a key meeting place for the city’s Christian community. And with further visionary additions to the restaurant underway this trend looks set to escalate. 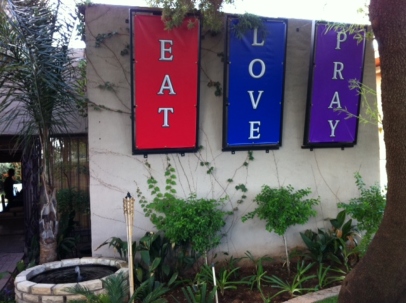 Venter says that four years ago God laid it on his heart to start a discipleship house in Bloemfontein. Later, he bought a property adjacent to a hotel he owns; it was ideally suited for establishing a guest house but he realised that he was meant to establish the discipleship house there. The House of Bread opened on this property on February 10, 2012.

One of the unique features in the restaurant is a baptism pool and to date about 30 people have been baptised there. Venter says that when baptisms are conducted,  people eating in the restaurant — including those from churches which do not practice full immersion baptism — tend to get up and join the witnesses at the pool.

Another significant feature is the 4m x 3m brick bread oven that is built in the style of Roman ovens that were used 2 000 years ago. The bread, which is made with stone-ground four and without sugar is baked as it was in New Testament times. Venter points out that the process in which bread is repeatedly kneaded and set aside to rest is similar to the discipleship process in which God repeatedly works in people’s lives and then requires them to rest in Hm and listen for His will. 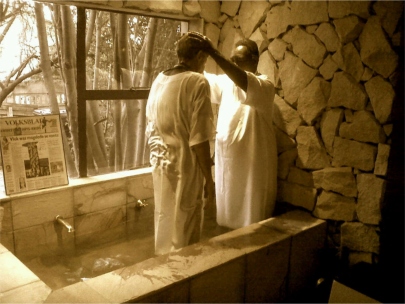 Eating bread and other food together is a key to discipleship that was impressed upon him in 2006 by a Messianic Jew, Gerrit Nel, who now lives in Jerusalem, says Venter. A number of decor features in the restaurant have a Jewish feel and it is closed on Saturday — for the Sabbath. Venter says the heart of it is to recapture the Christian lifestyle described in the book of Acts.

When he bought the property he did not at first realise that the house had only one room upstairs. That room is now called the Upper Room and it is used daily for individual and group prayer with a special focus on revival. A man called Paul, who was led by the Holy Spirit from his home country, Congo, to Bloemfontein, prays there daily. He now lives in the “Prophet’s Room”, a name given to a back room that was left over after the house was refurbished to create the restaurant.

Four years ago, Dawie Spies, who heads up the national ministry “Manne Van Die Woord”, challenged Venter to establish a men’s group. A men’s prayer group started in the neighbouring hotel, at 6am on Fridays. After six months the group grew to 20, and after a year there were 50 men. Today 130 to 200 men meet on Friday mornings in a large tent erected behind the restaurant. The interdenominational group of men has also been organised into 20 disciple groups. 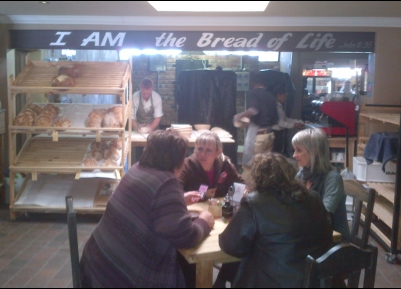 Venter says that a year ago, 100 of the men prayed together on a farm, asking God to bring revival and to break down spiritual walls in the city.

“And last Wednesday we had a meeting here (at the restaurant) of 50 spiritual leaders of the city,” he says, relishing the way that the venue is bringing the city’s Christians together.

Other projects under development include a boma theatre where Christian dramas will be staged and regular fireside chats will take place.

“We have contacted the local radio station OFM and in the near future they will broadcast live from House of Bread on Sunday evenings. We are also working with Hennie Smit (Egoli) and Johnny Louw, an evangelist, on a program that we would like to do on Kyknet  — more or less like “Toks and Chops” but with a strong spiritual punchline at the end.

“We believe that this concept will be a winner because they will invite 1 or 2 guests for the evening with food, baking  bread, live music and then talk about everything in life from rugby to everyday life and the punchline  will be  their testimonies !”

Work has also started on the construction of a 1:20 scale tabernacle behind the restaurant.

“We will use it for tours and teachings,” says Venter.

“There are six furniture pieces in the tabernacle and each one is relevant to your spiritual life.”