Or, to ask the same question in a different way: What marks our lives?

This is a question prompted by my own typical end-of-the-year reflection and review. A question which itself is made up of several other questions including: What did I achieve this year? Was I successful in attaining my personal goals? Was I also able to help others achieve theirs? How did I spend or invest my time? Am I living a life of purpose and passion (in God) or am I simply going through the motions, focused on surviving (and not thriving)?

I also like to ask: What have I learned this year? and What would I do differently next year?

While this type of reflection can be done at any time of the year, the fact that here in the Southern Hemisphere an extended holiday period usually precedes the start of a new calendar year, conveniently lends itself to such introspection and, of course, a fair amount of forward planning for the year to come.

This year, however, the passing of President George HW Bush on November 30 at the age of 94 hastened me into such reflection a little sooner than I had anticipated.

I was only 18 years old when he became the 41st President of the United States in 1989 and I have to admit that I wasn’t that interested in politics at the time, not to mention world politics. 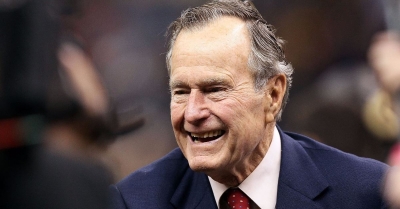 In his inaugural address, George HW Bush pledged to use American strength as “a force for good”. This pledge would be tested on numerous occasions, including the end of the Cold War with the consequent emergence of new nations, the overthrow of General Noriega’s corrupt regime in Panama after Noriega threatened the security of the Canal; and, of course, Desert Storm, the famous 100-hour land battle that finally defeated Iraq’s army and freed Kuwait from invasion.

History shows, however, that despite his diplomatic and military triumphs abroad there was a growing disconten at home due to a faltering economy, among others, and he consequently lost his bid for re-election to Democrat Bill Clinton.

But what I found most fascinating was that subsequent to his death, in all the tributes I read or listened to of George HW Bush, and irrespective of whether the tribute was made by a friend, a grandchild or even a political opponent, the same language was used to characterise him: He was a man guided by his faith, who prioritised family and who was committed to serving his country (even before he became president and long after his term of office had come to an end).

Faith. Family. Service. Three words that carry great meaning. They give us who did not know him personally a glimpse of the measure of the man. Though he was not perfect and certainly had his fair share of flaws and fears, he lived his life with purpose and passion, upholding by the grace of God and to the best of his ability the values he held so dear, even when seated in the White House and during times of great change on the world stage.

This, then, was a timely reminder to me that in all my planning and dreaming for next year and indeed the years ahead, as a believer I am to be guided by my faith in Jesus Christ and bear in mind His plan and His purpose for my life, all the while safeguarding those things to which I attach value, such as being a person who keeps her word and time with my husband and children.

For my life will be measured by how I lived it and not necessarily by what I achieved.

I wish you and yours a blessed Christmas and a prosperous New Year!