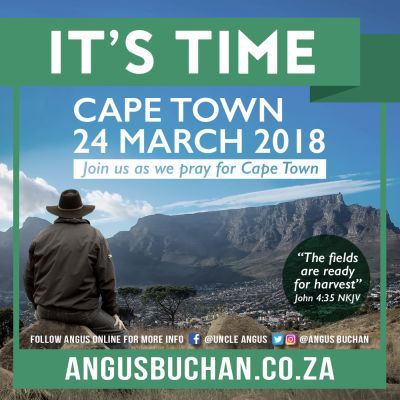 Explaining why he expects more from the prayer day in Mitchell’s Plain Cape Town in just over a week than from the historic, miracle-filled It’s Time event on March 22 last year when a million people prayed together in Bloemfontein, he said: “It’s almost like this one is more prophetic — more specific for our nation.”

Farmer-evangelist Buchan who was inspired by God to call the nation to prayer for both events was talking to Gateway News in a telephone interview yesterday.

Prophetic words
Asked about his prophetic expectation for the day, he said: “It is significant that there have been prophetic words spoken over Cape Town — over the Southern tip of Africa — for years, by prophets all over the world talking about the great revival that would [start in the Cape and] spread through the continent and all over world.”

Read Ashley Cloete’s in-depth series The Road to It’s Time Cape Town for a historical tour of the spiritual battle that has been waged over centuries leading up to the fulfilment of the region’s godly destiny — Click Here to read the articles.

People were coming from other nations to be part of the It’s Time event on March 24 “to see what God is going to do”.

Regarding the outworking of the revival prophecies he said: “The season has to be right, the land has to be prepared . There is a season for planting. This is the season for revival. Not 10 years ago. Now.

“I’ve been preaching for 39 years. I’ve been to Greenpoint stadium, I’ve been to Newlands Rugby Stadium, Newlands Cricket stadium. But never have I felt like I feel now.”

Spiritual warfare
Alluding to personal attacks directed against him on social media by both Christians and non-Christians in the run-up to It’s Time Cape Town, he said he had never experienced such spiritual warfare before.

Much of the social media hostility has been in response to newspaper reports that Buchan had said God was angry with Cape Town and the city should repent if it wanted rain.

Buchan said while initially taken back by the social media hostility he was feeling closer to Jesus and more defended by Him than ever before. He had forgiven in his heart all those who had attacked him and he loved them unconditionally and was praying for them.

Getting to the purpose of the Cape Town prayer day, he emphasised that although it was being held almost exactly a year after It’s Time Bloemfontein it was not an anniversary event. Nor was it intended as day to pray for an end to the prolonged drought in Cape Town and surrounds, although he believed rain would come and the desperate need for rain would be some people’s reason for attending the event.

Call to repentance
He said the prayer day was being held because of “a clear Macedonian call” he had received from God in July last year. He said the Scripture God had given him was an evangelistic one — John 4:35, which talks of the fields being ripe for harvest — but the main point of the day was to call people to repent and acknowledge there is only one God. Secondly the day was to pray for physical and spiritual healing, and then for the nation.

God had also spoken clearly to him through a Scripture Union devotional written by a man who ran a drug rehabilitation centre in the impoverished, gangster-ridden Cape Flats area, that the prayer day should be in Mitchell’s Plain.

It would not be an interfaith event but a Christian prayer meeting, although everybody was welcome.

“We will be praying to the Lord Jesus Christ Himself and then God is going to take over,” he said.

Biggest Cape event ever
Chuckling that he was sticking his neck out again, he said he believed that It’s Time Cape Town was going to be not only the biggest Christian event ever seen in the Western Cape but the biggest public event of any kind in the area.

“I’m believeing for mulitudes. I can’t give you the figure because God hasn’t given me the figure but it’s going to be huge!” he said.

Tons of rubble were being removed from an area the size of 60 rugby fields that was being prepared for the prayer event.

Buchan said dignitaries such as the Chief Justice Mogoeng Mogoeng would be at the event, and he had high hopes that President Cyril Ramaphosa — who they had invited — would be there.

But he said more than anybody else, the day was about the “nobodies of the world” with whom he identified and for whom he had special compassion.

“It’s for the people who live in shacks, for the drug addicts, the gangsters, the guy who has lost his business, whose marriage is falling apart. The guy who has no vision.”

Torrential rain
Expressing his high expectations for the day Buchan said: “We are going to come together — and the rains will come, and it will be torrential rain, not just a couple of showers. And the people will bow their knees — especially those who have been throwing stones — and they will say sorry to God and He will forgive them because He is a forgiving God.

“God is going to visit us in an awesome way with signs and wonders following. And people are going to be healed in their seats — like they were in Bloemfontein. And youngsters who are on drugs and have no hope or future are going to throw away those things and get on with their lives.

“Gang leaders are going to start leading in the right direction and God is going to use them — I believe they have the potential to turn Mitchell’s Plain around.”

Chuckling again as we ended the interview, Buchan said: “When the rain comes — and its going to come in torrents — I’m going to be heading for the hills. I don’t want to touch God’s glory. I want to be like Elijah, I want to take off. I’m going to run for my life because I don’t want anyone to come near me and say even ‘Well done’ because it’s got nothing to do with me.”

For more information about the It’s Time gathering and to book free parking tickets visit www.angusbuchan.co.za. You can also keep up to date on It’s Time at UncleAngus on Facebook, and @angusbuchan on Twitter and Instagram.