Rev Johnnie Moore, an author, speaker and humanitarian who has been called one of the world’s “most influential young leaders,” is living proof of this good news. In addition to his advocacy, which has helped provide tens of millions of dollars in emergency assistance to persecuted Christians around the world, Moore (33), helped lead the charge to get genocide resolutions against ISIS passed unanimously in both houses of the US Congress and in the British and European Parliaments.

In his new book, The Martyr’s Oath, released on Tuesday, Moore calls not only for the church to pray and have compassion for persecuted Christians around the globe but to act on that compassion. Appropriately, the book’s subtitle is Living for the Jesus They’re Willing to Die For. 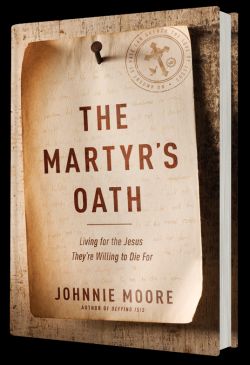 “There is so much missing in our experience with Jesus,” said Moore, who is also a member of President Trump’s White House Faith Advisory Council. “You can only see it when you step into the life and experiences of those who not only have Jesus, but without Him, they cannot imagine life itself.

I recently recorded a podcast with Moore in which he and I discussed his new book, The Martyr’s Oath, which details specific stories of persecuted Christians worldwide. It includes one about a woman in Nigeria named Rose who, despite the murder of her husband and children by the terrorist group Boko Haram and the threat of the loss of her own life, did not denounce her relationship with Jesus. She escaped with her life and is still serving the Lord.

Moore also recalls a Bible-school graduation service he once attended in India. Before members of the graduating class received their diplomas, Moore said, the budding pastors were charged with a unique responsibility. They took an oath not only to live for and preach Jesus, but if necessary, to give their lives for Him as well.

The Martyr’s Oath is a very important book. Take its message to heart. And visit Moore’s website at martyrsoath.com for more information.

Let’s start a movement in which persecuted Christian become a priority of the church. We need to bring persecution like this to light and bring it to an end.