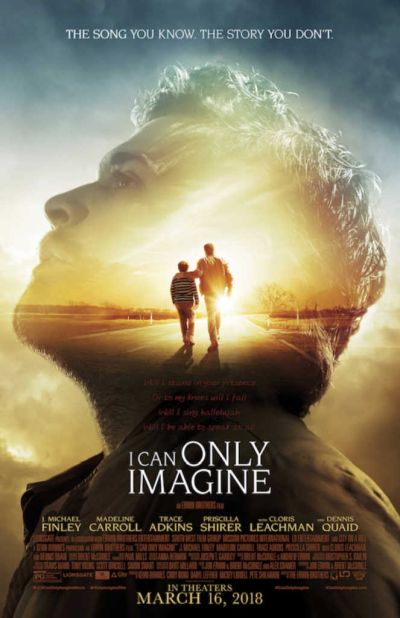 No screenings in Eastern Cape

South African moviegoers in many parts of the country will soon be able to see I Can Only Imagine, a critically-acclaimed film based on the true story behind the number-one-played radio single in Christian music.

The Erwin Brothers’ film about the story behind Mercy Me lead singer Bart Millard’s redemptive relationship with his troubled father — which was the inspiration behind the Christian rock band’s hit song I Can Only Imagine — grossed a staggering R213-million at the US box office in its opening weekend,  ranking third overall behind Tomb Raider and Black Panther.

The movie opens in South Africa on May 11 and there will be sneak previews at a number of Ster Kinekor cinemas around the country. But unfortunately for audiences in the Eastern Cape it appears that either Ster Kinekor or theatre management at individual cinemas decided not to preview or release the movie in Port Elizabeth, East London or anywhere else in the province.

Asked about the exclusion of the Eastern Cape, Celeste La Mantia of public relations company MS Publicity said as far as she knew individual movie houses selected movies they believed would do well with their target audiences. Later she also sent Gateway News the following somewhat puzzling response from distributors Ster Kinekor to the Eastern Cape question: “It is a Ster Kinekor decision.  Ster Kinekor will only hosted the influencers screening on 12 April and then the screenings in conjunction with media partners on 9 May.”

Perhaps it is time for Eastern Cape viewers — and viewers in any other excluded areas — who would like to see quality faith-based films to let their local cinemas know?

The idea for the I Can Only Imagine song was inspired by Millard’s past and was written years after finally overcoming his abusive childhood. It immediately resonated with audiences of all ages, became an instant top-selling hit, won Songwriter Of The Year and Song Of The Year at the Dove Awards and was certified as a double platinum selling Christian song.

“We were making an independent record, and we needed one more song. And I was literally just trying to find a blank page [in my journal], and every page had the words ‘I Can Only Imagine’ written on it,” shares Bart. “So it was kinda like, ‘I get it.’ I wrote the song on the bus one night. Even though it took about five or ten minutes to write, it had been in my heart for a really long time.”

I Can Only Imagine (the movie) tells the story of a little boy in Texas who is emotionally and physically abused by his father (Dennis Quaid) and abandoned by his mother. The abuse starts after his father suffers a brain injury due to an accident at work and becomes a monster who is unable to control his anger and disappointment with life. By the grace of God, Bart (John Michael Finley) and his father manage to redeem their relationship during his teenage years and he gets to witness the power of faith and transformation first-hand.

Broadway actor, John Michael Finley’s (Les Misérables, Sweeney Todd), makes his on-screen debut in the lead-role of Bart Millard in this emotional film. It was his booming voice that first drew filmmakers to cast him as this pivotal character. Interestingly, his background proved to connect him even more to the role.

“I was born in Arkansas and grew up in southern Missouri, so I had that Midwest mentality,” says Finley. “Bart and I both had early life events that made us grow up real fast. And I connect with the way Bart uses humour to deflect other people,” Finley said.

Acclaimed actor, Dennis Quaid (The Right Stuff, Breaking Away, The Parent Trap, Far From Heaven) plays Arthur, Bart’s father, who saw his dreams dashed and strives to protect his son from similar disappointment, even if it means having no dreams at all. The film also boasts impressive performances by model and television star, Madeline Carroll, in the role of Millard’s wife Shannon as well as Golden Globe Winner, Cloris Leachman (A Brand New Life, Malcolm in the Middle), as Memaw.

The film officially opens in South Africa on 11 May at the following cinemas: