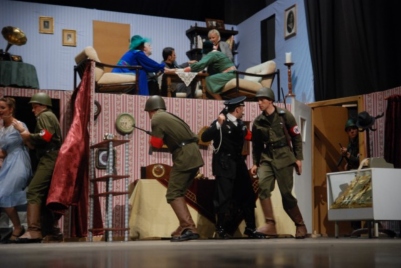 [notice]Michelle Moss met up with director Richard Montez at the Lighthouse Church in Port Elizabeth to chat to him about his upcoming theatre production, “The Hiding Place.” It’s based on the true-story book and movie of the same name. The show will take place from the 13-16 of June at 7pm nightly with a show at 2pm on the Saturday.[/notice]

International Christian ministry director Richard Montez has been bringing a variety of shows to PE for the last 10 years, from comedies to Christmas plays to musicals such as “Joseph and the Amazing Technicolor Dreamcoat” among others. He also plans to take shows to Cape Town and Durban in future. The Hiding Place is the true story of faith, forgiveness and courage, of Corrie ten Boom and her sister, Betsie, two middle-aged women living in Holland at the start of the Second World War. The stage production is filled with lots of suspense, surprises and funny moments. Comedy and drama mixed together make for an enjoyable and inspiring evening that the audience will not soon forget.

The play opens with an introduction to Corrie and Betsie ten Boom, middle-aged sisters working in their father’s watchmaker shop in pre-WWII Holland. Their uneventful lives are disrupted with the coming of the Nazis. Suspected of hiding Jews and caught breaking rationing rules, they are sent to a concentration camp, where their Christian faith keeps them from despair and bitterness. Betsie eventually dies, but Corrie survives, and after the war, must learn to love and forgive her former captors.

It would be a good show for Christians to see because it’s about a woman who is trusting God and wanting to be used by Him. God used what she was to make a difference in her community. God askes us the same thing, “What do we have in our hands?” and then asks us to use that. “Watches” became the code-word for Jews in the context of the play and the woman asks “Are they broken?” as a further code-language. She was able to hide thousands of Jews and lead them to safety.

Richard bases his theatre-ministry in Dallas Texas, and has been going for 25 years. He has been to 60 southern countries. “The Hiding Place” has been staged in Russia, the Ukraine, Poland, Peru, The US, Mexico and Moldova. It’s performed by church locals at each different place. Richard says he feels blessed to be able to travel the world working with the body of Christ.