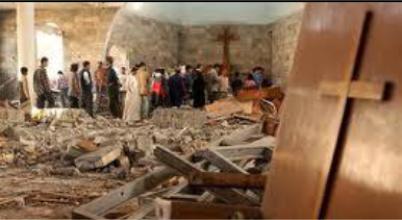 [notice] Iraqi Christians, once the focus of great concern among the worldwide Christian community, now feel forgotten in their ongoing sufferings. Canon Andrew White, a missionary minister serving in Iraq, shares his feelings and experiences from within Baghdad. From InContextMinististries‘ A World in Motion, Issue 65.[/notice]As the Middle East continues to be in turmoil, an Anglican minister serving in Iraq says that he is seeing more believers fleeing Iraq. Canon Andrew White, who serves as Vicar of St. George’s in Baghdad, writes: “As I watch television, I see stories of killings in Gaza, Israel and Syria – such terrible news. 40 people killed in Gaza, 3 in Israel and 9 in Syria; that is 52 people, quite terrible.” Canon White wrote: “By 12.00 today there had been serious bombings and 119 people had been killed. “Just as we were about to go to our service I wrote on my Facebook account the following: ‘We are about to go and worship now. G-d has not left us, everybody else has. We have just had 119 people killed in two terrible car bombs and you do not see even one line about in any of the international media.’” (ASSIST NEWS)

From a persecuted Christian perspective:
Archbishop Matthew Man-Oso of Kaduna province in Nigeria, commended young Christians for not taking the law into their own hands after the bombing of churches, the massacring of believers and the inability of the state to provide them with safety. He said “sometimes God allows very difficult and challenging situations to come our way in order for us to bear authentic Christian witness and, I think that the church in Northern Nigeria have at hand one such rare moment. We should and must rise up to be witnesses of the Gospel.”

Christians in Iraq, similar to their counterparts in Nigeria have faced and are still facing severe persecution, and as a result, thousands have left the country. Perhaps it’s easier to leave than to retaliate against the enemy? Canon Andrew said people in Baghdad “have nothing”, as he told of a churchgoer who was found begging on the street by a member of the church staff. “He asked her why she was doing this. She said all the food she had from church has run out and she has no money to pay her rent. We will give her everything she needs today but this is another example of the terrible need. All may have left us but our Lord is still here.” Mr White said he had not seen so many people fleeing for several years. “Iraq is no longer a news issue,” he continued. “We cannot blame the media for this. So many of the journalists have been targeted here and many killed, especially locals. The media have moved to the traumas elsewhere in the region.”

From a free church perspective:
We cannot ignore the plight of persecuted Christians in places like Baghdad, but our role is not to advocate for human rights at the cost of their religious rights to being Christian – our role is to encourage them, to help them in whatever way possible to stand strong through the storms of persecution. If the church in Iraq feels forgotten by the rest of the body, shame falls on every member. Equality in the body of Christ means that while some parts suffer and others have freedom, the latter are given freedom to serve the former so that there may be balance in the body. In AWIM, we have mentioned before that the end of Christianity in Iraq might happen in our lifetime, and Canon Andrew confirms this reality. While there is still time, may we do what we can to restore honour to the Body of Christ.