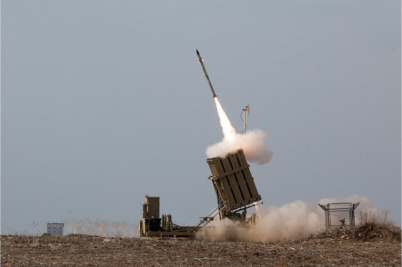 Israel’s Iron Dome anti-missile system has been wildly successful during the current Gaza war, but on occasion it can and does miss incoming terrorist rockets.

One would think that the 10 percent or so of Hamas rockets predicted by Iron Dome’s radars to hit populated areas that are not intercepted would still cause significant Israeli casualties. But somehow, they don’t.

An earlier, unconfirmed report floating around the Internet had a Gaza resident attributing the lack of Hamas accuracy to Israel’s God moving the rockets off-course to protect His people.

“We do aim [our rockets], but their God changes their path in mid-air,” a Hamas commander was said to have told someone who wondered why Gaza-based militants can’t seem to hit their targets.

Whether or not that report is accurate, an Iron Dome operator whose battery failed three times to down an incoming missile headed toward Tel Aviv last week said the overall assessment is.

“A missile was fired from Gaza. Iron Dome precisely calculated [its trajectory]. We know where these missiles are going to land down to a radius of 200 meters. This particular missile was going to hit either the Azrieli Towers, the Kirya (Israel’s equivalent of the Pentagon) or [a central Tel Aviv railway station]. Hundreds could have died.

“Suddenly, Iron Dome (which calculates wind speeds, among other things) shows a major wind coming from the east, a strong wind that…sends the missile into the sea. We were all stunned. I stood up and shouted, ‘There is a God!’

“I witnessed this miracle with my own eyes. It was not told or reported to me. I saw the hand of God send that missile into the sea.”