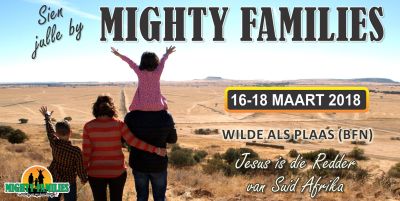 “It’s Time” has become  a catchphrase in South Africa since a million people gathered on a farm field near Bloemfontein on April 22 last year to pray for the nation.

And now it’s almost time for the families of South Africa to gather on that same field for the inaugural Mighty Families event which the organisers describe as a weekend family festival in God’s presence from March 16 to 18 which will send out a prophetic message “strong families, strong nation”.

Vision birthed
The vision for Mighty Families was actually birthed at It’s Time Bloemfontein, as local Christian leaders were inspired by the sight of families camping there together in order to be part of the historic prayer event, said Dr Arno van Niekerk chairman of the Mighty Families organising committee in an interview yesterday.

“It was a special experience. So we went and prayed about it and the Scriptures that the Lord gave us were about family:  Joshua 24:15 — ‘… as for me and my household we will serve the Lord.’ and Malachi 4:6 — He will turn the hearts of the parents to their children, and the hearts of the children to their parents …,” said Van Niekerk.

The Mighty Families weekend on Wilde Als farm in two weeks time is for all families — family members of all ages are invited  and single people are welcome “because we are a family”, he said.  In addition to great worship led by Heinz Winckler, a powerful lineup of speakers, ample camping facilities and food vendors, there will be special provision for children including a huge, secure play area where Living Ball and other children’s ministries will be active.

Much has come out of the first It’s Time prayer day — as evidenced by many positive changes in the nation since then. Mighty Families was aimed at taking that momentum forward with an emphasis on restoration of the family which faced challenges such as a very high divorce rate — “because if families fall then everything in society collapses. But if families are strong, the nation is strong”, he said.

Momentum
The second It’s Time national prayer day will be in Cape Town on March 24 — the weekend after Mighty Families. The timing of the events was not planned — it was just confirmation of the momentum in the nation that God was orchestrating, Van Niekerk said.

Simarlarly, just as the Mighty Men movement has raised up men Mighty Family was intended to take that momentum forward to impact women and children too, he said. It was not to compete with Mighty Men which should keep on going, but to build on it.

The event on Wilde Als farm from March 16 to 18 was geared for both campers and day visitors. The event will formally start at 6pm on Friday March 16 but campers were welcome to start arriving from Friday. Everybody should bring camping chairs to the seating area near the stage. Hats and sunblock were also advisable.