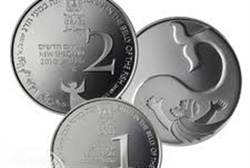 Israel’s “Jonah in the Belly of the Fish” silver coin has been voted as Coin of the Year by the Krause Publications, a US publisher of periodicals on numismatics and hobbies.

The coin was chosen as the best among 95 coins, which had been judged in over 10 categories, including best silver coin, most popular, best contemporary event, most historically significant, best gold coin, most artistic, best trade, most innovative, and most inspirational coin.

The selection was made by a panel of judges who are experts in the field, including writers, editors, and members of the American Numismatic Association.

Jonah the Prophet was requested by God to warn the city of Nineveh to repent for their sins or their city would be destroyed. Jonah fled from his mission by boarding a ship bound for Tarshish. When a violent storm began, the ship crew cast lots to determine who was responsible, and the lot fell on Jonah.

He was thrown into the sea, the storm calmed down, and a large fish, popularly referred to as a whale, swallowed up Jonah into its belly, where he remained for three days and three nights. Jonah prayed to God and was saved when the fish spat him out on the shore.

Understanding that he had been punished for not going to Nineveh, Jonah followed God’s command, and the people of Nineveh repented and were saved from destruction.

In the first round of the competition, the Israeli coin was picked as the winner in the most artistic coin category, and in the second round it was chosen as the coin of the year from among the 10 category winning coins.

The competition’s organizers congratulated the Bank of Israel on the selection, saying that the design’s “simplicity speaks volumes and invokes a little bit of wonder.”

The “Jonah in the Belly of the Fish” coin is the sixteenth commemorative coin in the Biblical Art series issued by the Bank of Israel. The series has included coins such as, “Elijah in the Whirlwind”, “Samson and the Lion” and “And the Waters Were Divided.”