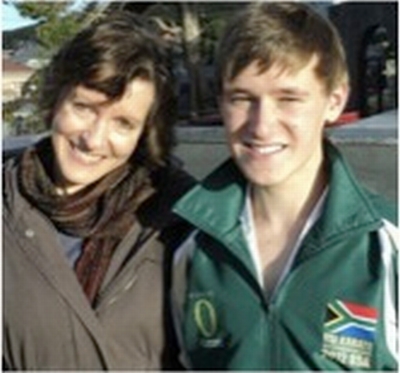 [notice]LEONORA HAMMOND (pictured above with her son Christopher) writes: “We have four children; our third, Christopher, was born with chronic renal failure. I became a kidney donor for my son, and 8 months later I was diagnosed with breast cancer. I am hoping my story will be an encouragement to women in stressful situations.” — Leonora is married to missionary leader and author Dr Peter Hammond. The Hammonds live in Cape Town. [/notice]

My third pregnancy was fairly routine. I was 35 years old and in very good health. At 27 week gestation however, life as we knew it was about to change! A scan showed that Christopher had posterior urethral valves, which has the risk of complication of renal failure. He was delivered via caesarean section at 36 weeks.

From the age of 5 days he has faced multiple surgeries and procedures, including the removal of his right kidney at age 18 months. He has been a regular out-patient at Red Cross Hospital, and we have been looked after by a very dedicated staff of Renal Specialists.

With the onset of puberty, and thus a progression of growth, Christopher’s renal function began to slowly deteriorate. Peter and I went for testing and I was found to be the ideal donor for Christopher.

After a couple of false starts we were eventually given December 2nd 2009 as a new operating date. At this stage Christopher’s remaining kidney function was down to less than 5 per cent. My kidney was transported to Red Cross Children’s Hospital in good time and the four hour operation on Christopher was deemed mostly successful, with some ‘minor difficulties’. In the end though, these complications turned into months of further operations and serious delays. The graft kidney was not ‘kicking in’ and Christopher was in end-stage renal failure now.

Finally, in March 2010 Christopher faced his 11th operation, where his own native ureter – which was left from his nephrectomy at 18 months – was reconnected to the graft kidney. This operation, though very painful and difficult to recover from, ushered in the beginning of Christopher’s recovery. Several further procedures were needed. His weeks at the hospital had turned into months.

Just as life was settling back into a semblance of normality, and my own body had healed from being a donor, I went for a routine mammogram. A subsequent biopsy revealed ductal breast cancer and it was deemed necessary to perform a bilateral mastectomy, followed by months of chemotherapy. My first reaction to the news was numbness. But to be honest I think the revelation of having ‘the Big C’ was much worse for my family. The fact that I have cared for a chronically ill child for 16 years has prepared me for ‘hospital emotions’, and I felt no fear. My faith in God and His sovereign plan for me undergirded us throughout the next chapter of our lives.

Seek support, adopt healthy lifestyle
I know there are diverse opinions on what exactly causes cancer, and what the cures should be. From my perspective and experience, I feel that stress and trauma in my life certainly helped the cancer along! My advice – Take the time to look after yourself in the midst of your busyness. Surround yourself with friends from your congregation or fellowship who will be available to support you and assist you in a time of crisis. Look after your health; choose healthy foods and an active lifestyle. The way we live as adults will one day be mirrored by our children, so if we want them to make healthy choices in the future, we must model this by example. A positive outlook on life, coupled with good nutrition and exercise can prevent many diseases, including cancer.

Two and a half years have gone by since the transplant, and Christopher is doing remarkably well. In 2010, one year after the transplant, he graded for his Black Belt in karate. After training four to five days a week in the lead up to the Karate World Championships in Atlantic City, in July, he earned his national colours and represented South Africa in the USA.

My cancer journey has certainly given me a new perspective on things. I try to realise every day, that nothing can be taken for granted, and I thank the Lord for restoring my son and me to good health again.