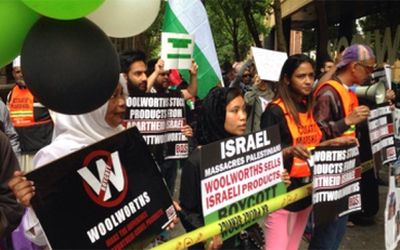 A lot of thumb sucking and lies are aiding the persecution of Woolworths over the Israel / Palestinian issue.

A group calling itself the National Coalition for Palestine (NC4P) on Monday released a report claiming Woolworths is losing almost R8 million a month because of the boycott campaign. It claims the popular store has lost approximately R31 million since the start of the campaign which Woolies says isn’t true. Management says they have not taken any financial knock and have in fact continued to increase sales. going on to question how the NC4P could have arrived at such a claim.

In fact in a trading update released this week, Woolworths said group sales increased by 47.5% for the first 20 weeks of the current financial year from the same period the previous year, which is good news for employment and job creation, South Africa’s two most vital concerns.

The BDS campaign which encapsulates NC4P’s venom toward Israel — has been renamed by opponents as the “Buy, Develop and Support Israel” campaign.

The NC4P wants to put pressure on people to promote their BDS campaign and stop Woolworths buying products from the Jewish state.  One comment on social media said, “They want to put pressure on Israel so that it will eventually change its policy of occupation of the Palestinian Arabs in the West Bank & East Jerusalem; or it’s blockade and assaults on Gaza. This, by persuading universities and businesses to break ties with Israel similar to what the ANC achieved during the struggle against Apartheid.”

The tragedy is the fundamental inaccuracy which has been trumpeted so often, people think it’s true.

There is no occupation taking place; Israel was granted the legal right by unanimous international vote, to settle in western Palestine between the Jordan River and the Mediterranean Sea. Political rights to self determination were also given to the Arabs in four other mandates, Lebanon and Syria, Iraq and Jordan and it is those Arab people still living in Israel who now call themselves Palestinians.

Anything but apartheid
Israel is anything but apartheid — Miss Israel Universe was Lina Machola, a half Arab, half Russian Christian. The Commander of the famous Israeli Army Golani Brigade is Colonel Gassan Alian, an Arab Druze, and there are Arab judges and Palestine-supporting Arabs sitting as MPs (MKs) in the Israeli Parliament (The Knesset). Jews and Palestinians sit side by side on buses, at university and on beaches. It is hard to think of an area where Palestinians are not permitted. Does this sound like apartheid?  Yet tragically, with the latest chilling intifada carried out on Israeli people in public places, some form of restriction may yet be seen in an attempt to remove terrorists from their midst.

Today, if there is any apartheid in Israel it is against the Jewish people as they are denied access to their own Temple Mount to avoid causing an uproar.  Temple Mount  is deeply significant to Jewish people. It is Mount Moriah – the same place where Abraham made the altar for the slaying of his son of the promise, (Genesis 22:1-2). It’s the site of Solomon’s Temple, raised up to the glory of God, and its successor, Herod’s Temple. It was here where the naming and circumcision of Jesus took place (Luke 2:21-39). Later, it was here that Jesus astonished the religious leaders with his understanding and insight as a twelve-year-old boy (Luke 2:41-50). On two separate occasions Jesus entered and cleansed the Temple by throwing out the money changers and commercial vendors from the Court of the Gentiles in anger for it was supposed to be “a House for all nations” not a bazaar. (John 2:12-25; Matthew 21:23-26). And Jews must put up with being denied the right to worship their God on Temple Mount.

The chairperson of the NC4P is a Rev Edwin Arrison. On the grounds of his being a beneficiary of freedom from those who opposed the South African apartheid, he supports the hatred against Israel. He demands a higher standard of Israelis; love, equality and justice, and finds them wanting. Our own nation, like most other nations, falls down on these points too. In an explanation, Rev Arrison quotes a number of defunct arguments not least being findings by the Russell Tribunal, long been discredited, and obfuscates behind the smokescreen of saying Israel practices “a very sophisticated form of apartheid” – so sophisticated no-one is aware of it.

He disingenuously mourns for the thousands of Palestinian Christians that have left the land, blaming Israel for making life difficult for them. Anyone who has visited Israel finds that Bethlehem, where Jesus was born, was a flourishing Arab Christian town not many years ago, which now under the control of the Palestinian Authority has very few Christian residents left.

The Palestinians desire “no house” for Jewish people as can be gauged by these recent declarations of people in influential positions: “The Prime Minister of Gaza, Ismail Haniyeh says “stop negotiating with the enemy. We will not recognise Israel.” A Hamas spokesperson said in July “anyone who has a knife, a weapon or a car and is not attacking a settler or a Jew, and is not killing tens of Zionists, does not belong to Palestine.” Khaled Meshaal leader of Hamas and ruler of the Gaza strip has said, “before it dies Israel must be humiliated and degraded.” Arrison is siding with them and is affronted that despite his demands that Woolworths stop trading with Israel, they haven’t done so. The arrogance of denying South Africans choice is breath stopping. And objection is mounting by people who don’t like their tactics.

Shopping app
“Am Yisrael Buy”, is a new app (available on Apple, Android and Windows Phone) designed by a rabbi to help users locate and buy Israeli products. “Am Yisrael Buy” is a spoof on the national cry of “Am Yisrael Chai! Israel lives!” Interestingly, despite their different goals, Am Yisrael Buy and the anti-Israel BDS apps are similar in that they share information about Israeli products which can be useful for purchases. The Rabbi is not looking to make money or start a company. “For me it’s about the mission,” said Rabbi Cohen,. “I’m just very fortunate to be in a position where I can make a difference.”

In South Africa, momentum is building through a petition running on Facebook ‘Africa for Israel In Support of Woolworths’ at http://chn.ge/1zMdRNQ . In the words of one supporter, “The People of God must support the Children of God”.  Max Ellwood of Somerset West says, “Under our constitution we have freedom of speech and freedom of choice, I will NOT be bullied by these hooligans!”

Christians cannot sit on the fence – while there is still the right to choose. If they decide to stand for freedom alongside Woolworths, they may write to the CEO, sign the petition or express themselves to the media, and stand up when called to do so. The hostility is fierce. To paraphrase the poem by Pastor Martin Niemoller, “First they came for Woolworths and I did not speak out, because I believed it would soon be over. But by the time they came for me, there was no one left to speak out.”