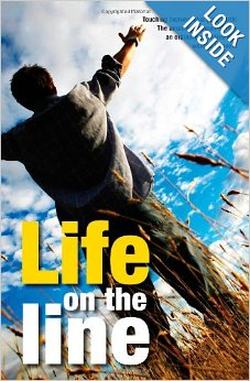 LIFE ON THE LINE: THE STORY OF DES AND ROS SINCLAIR AS TOLD TO AL GIBSON

In the first chapter of this testimony of Des and Ros Sinclair’s ministry we are told of Des’ miraculous escape from a West African jail cell after his abduction by radical Muslims. He was effectively on death row, chained to the floor and with his execution planned for the next morning, after he had refused the offer to renounce Jesus Christ and be spared.

Sometime during the night this young evangelist, who had been ministering at a series of crusades, became aware of a tall man dressed in white walking down the corridor, passing the guards who seemed totally unaware of him. The man then pushed open the gate of the cell and ordered Des and a fellow cellmate (who had just been led to Christ by Des) to follow him. I will not relate the rest of the story, but will tell you that the chapter ends with the Acts 12: 5-17 passage of Peter’s release from prison by an angel. The parallels in the two stories are remarkable.

And then the book gets even more interesting!

The Sinclairs have travelled to many parts of the world preaching the Gospel, often against fierce opposition. Story after story is told of extraordinary circumstances and supernatural events. Time and again Des has had his “life on the line” and has known the hand of God working in powerful ways for his deliverance.

Des’ ministry started in a most unusual way. He was abruptly launched into adulthood when his father kicked him out of home for defending his mother as she received lashings from this abusive man. Des resorted to living at a rubbish dump, where God started to speak to him and as he learned more and more about this loving Father he began to witness to the prostitutes and drug addicts who were his companions at the dump.

The book contains four chapters (interspersed throughout the book) of what Des was shown in heaven as his lifeless body lay in hospital after a mysterious illness and cardiac arrest at the age of 17. Part of what he was shown was his destiny of travelling to and impacting many nations. 35 minutes after being pronounced dead he returned to his body.

I must admit that for me personally the scenes in heaven need some processing and I look forward to discussions with others in my circle who I will encourage to read the book.

The stories of great drama and victory in the name of Jesus are balanced by glimpses into the humanity of this man of God who suffered through a time of grief and remorse after the tragic death of someone close to him.

Also, despite witnessing numerous supernatural healings, Des has not received a complete healing himself from diabetes, although he does experience divine intervention in this life threatening condition when he is out on the mission field. Whenever he is ministering at a crusade his blood sugar remains stable and he does not need insulin.

From this we can take the lesson that God is able to work through us even when we are struggling with health issues and that this is never an excuse for not involving ourselves in work for the Kingdom.

I can heartily recommend the book to anyone who is interested in learning more about how the God of the Bible is operating through his committed followers in the world today.