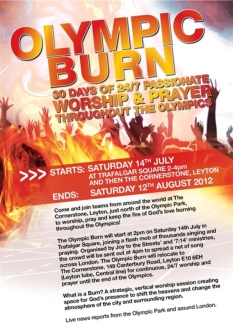 Worship teams from the United Kingdom and around the world will hold a 30-day Olympic Burn in London from July 14 to August 12 to keep the fire of God’s presence burning continuously  throughout the 2012 Olympics.

The fireplace was prepared on Saturday, May 26 at the London’s Burning event when thousands of people gathered at  Leyton Orient Stadium just 500m from the Olympic Park to worship and pray to release the fire of God’s love over London in preparation for the millions of expected visitors to the London games.

On July 14 thousands of worshipers will gather on Trafalgar Square from 2pm to 4pm for a worship flashmob. Thereafter they will relocate to the Olympic Burn site at The Cornerstone, Leyton, for 30 days of non-stop prayer and worship which will span the entire Olympic Games which run from July 27 to August 12.

During the Olympics, mission teams will gather at the Burn to worship and pray before taking the healing love of Jesus to the streets. If you are going to be in London for the Olympics and would like to be part of the Burn 24-7 or the  healing on the streets, you can  email londonsburning2012@gmail.com for more information.