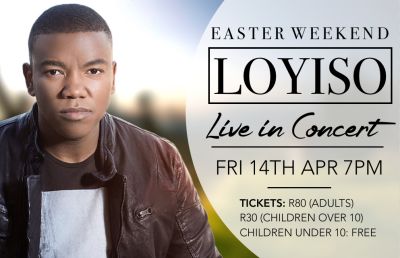 Award-winning South African artist, Loyiso Bala is set to perform in Port Elizabeth for one night only, at Word of Faith Christian Centre on  April 14.

Known for his smooth R&B voice, Loyiso has performed across the globe alongside the likes of John Legend, Jamelia, Elton John and Will Smith. Having won five SAMAs and three Metro FM Awards, two of which were for the best R&B album and best producer, Loyiso was also nominated at the MTV awards alongside international stars Alicia Keys, Rihanna and Akon.

When asked about his upcoming performance in Port Elizabeth, Loyiso had the following to say: “I have been looking forward to coming back to Word of Faith for a few years now since my last visit. To gather my hometown in one place so as to worship our God is the greatest privilege that I could ever ask for.

“The Spirit was so tangible the last time that I have no doubt that God will reveal himself in the same manner once again. I love to sing, not only to entertain, but to make an eternal difference in people’s lives, and so gospel music has afforded me this opportunity. May you be blessed, encouraged and changed as you join us in celebrating our Risen Saviour.”

Having graduated top of his class at the Drakensberg Boys Choir, Loyiso became the youngest conductor of the National Youth Choir at 19 and has since become a household name in South Africa, with his very first album selling triple-platinum.

A philanthropist at heart, Loyiso is an ambassador for Nelson Mandela’s 46664, the Smile Foundation, Afrika Tikkun, Cotlands and the South African Field Band Foundation, which sees him supporting several charitable and worthwhile causes.

He was also appointed the national UNAIDS Goodwill Ambassador for the Joint United Nations Programme on HIV/AIDS (UNAIDS), where he raises awareness around HIV testing and disclosure, reduction of stigma, discrimination against people living with HIV, and gender inequality — including violence against women and girls.

In 2012 Loyiso recorded his much-anticipated live Christian music DVD Love Complete. He went on to release a chart topping single, Time to Dance, which garnered huge success and became the precursor to his second Christian music project, Power | Love | Sound.

Tickets for Loyiso’s live performance are selling at R80 for adults and R30 for teens, with children under 10 entering free of charge. For more information, contact the Word of Faith Christian Centre on 041 3994400 or email info@wordoffaith.org.za. Visit their website at www.wordoffaith.org.za