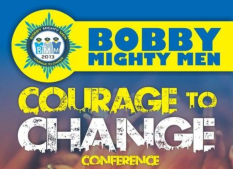 South Africa’s first Bobby Mighty Men — catering for men and women in uniform — is taking place next weekend at the coastal village of Struisbaai close to the southern tip of Africa.

The theme of the conference, which will be led by popular conference speaker, Johnny Louw, is ‘Courage To Change’, and it will be “wonderful” if the police officers, metro police officers, municipal police officers and Correctional Service officers who attend can experience the kind of change he had when he encountered Jesus at the Kalahari Mighty Men in Tosca in November last year, said  organiser Warrant Officer Org Kuhn.

Kuhn said he was a bitter, resentful man when he went to Tosca but he was completely changed for the better that weekend. Then after being stationed at Riviersonderend for 21 years, where friends said he would remain forever, he was transferred to Struisbaai.

Kuhn said he believed God had moved him to Struisbaai for a reason and so he set about arranging the Bobby Mighty Men at the Struisbaai Caravan Park from Friday, June 28 to Sunday June 30. He does not know how many people will come. But men and women in uniform and their children from anywhere in South Africa are invited. The cost is R120 per person and those coming must bring a tent and their food for the weekend. Praise and worship will be led by a team from the local Lighthouse Church.

Kuhn and his wife, Nicolene, and their two children will be there. They have heard of a group coming from Paarl, and a group of ex-cops coming from the Vaal Triangle, where they would like the next Bobby Mighty Men to attend.