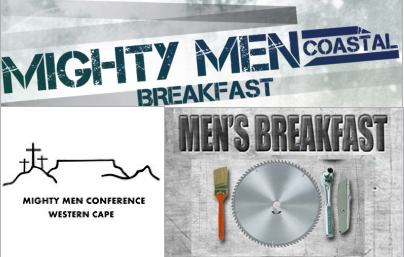 The Cape Town breakfast will be at Mike’s Kitchen at N1 City, starting at 9.30am. The aim of the gathering is to “socialise” and to receive “up to date information regarding the MMC WC 2015,” says public relations head Ina Murison-McGowan.

Any men who wish to attend the Cape Town gathering are asked to let the organisers know via a reply to the MMC WC Facebook page (https://www.facebook.com/mmc.westerncape?ref=br_tf ) — for numbers only and to give an indication of attendance. Breakfast will be “at your own cost”.

The PE gathering on Saturday, October 4, billed as the ‘Mighty Men Coastal Breakfast’ will be at Something Good Roadhouse at Pollock Beach, Summerstrand at 7.15am for 7.30pm and costs R45. Men who would like to attend are asked to RSVP to Lance Walton at 083 439 2905 or walton@aerosat.co.za by October 2.

Men will have an opportunity to share their testimonies at the event. Their will also be short messages from Gateway News editor, Andre Viljoen and KMMC Committee Member Lance Walton who will brief men on KMMC 2015 developments.