Oom Angus and War Piper show Brits how it is done, amidst laughter, tears, straight-talk and pledges 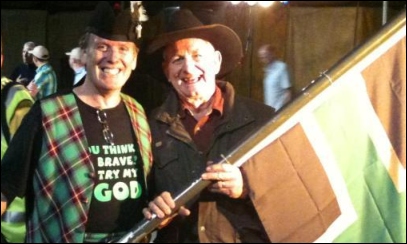 A welcome item in my inbox today was a dispatch from the picture postcard Yorkshire town of Patley Bridge where the seemingly tireless War Piper for Mighty Men spent this past weekend at the Dayley Bread Mighty Men Conference.

“And what an amazing weekend it was too!” says the War Piper (also known as Piperjames) who, together with the guest speaker and Mighty Man founder Angus Buchan, showed the lads from all over England, Ireland, Scotland and Wales, how real,  South African Mighty Men do it. Funny that Zambian-born Buchan of Scottish descent, and British immigrant and ardent Springbok rugby fan, Piperjames, are icons of an event that is reconciling South African men of many different backgrounds with Jesus, their families and each other!

But back to the dispatch, picking up on the War Piper’s description of his arrival at Patley Bridge: “Once off the bus it was straight into the bus shelter where the Mighty Men Tartan Kilt was donned and then off to the Agricultural Show Ground where the event was being held. As I arrived at the gates and with suitcase in tow, I was met by Afrikaaners (all living in the UK) keen to accommodate me in a ‘spare space’ in their tent; it was as if they knew the War Piper was coming from the Mighty Men of South Africa.”

He continues: “A beautiful 50 foot  high yellow and white, round marquis dominated the plush green fields. This was the ‘tabernacle’ for want of better words and was where God’s presence would be felt (literally) and where the souls of many a sinner and ‘waifs and strays’ would be saved.

“Next to it was a blue and white marquis where the chefs were to prepare Aberdeen Angus beef stew with fresh breads for the men,  along with puddings, amongst other well presented eatables, and it was all donated to the men free of charge from Christians all over the place in support of the event.

“The weather was glorious; just like a hot summers day in the Cape but now in the undulating hills and dales of North Yorkshire (God’s County..not country) as I was reminded of time after time when speaking to the local populous, lol!

“As it was on Thursday when I arrived the organizers were still busy putting together the final touches before the main bulk of cars and caravans and even Winibagoes arrived.”

Among the Thursday arrivals was a man fresh from Johannesburg, visiting his son, a local Mighty Man. Braais were enjoyed on the field that night.

But it was on Friday morning that the UK men discovered that real Mighty Men rise early.

The War Piper writes:  “On Friday morning the pipes sounded at 06:00 hrs but not before a dawn chorus of hundreds of thousands of birds all awakening along the undulating River Nidd next to the field in which we were all camped.

“All the men began to get involved in touch rugby games, walking and even taking bikes off for a ride as the event marshalls had meetings and prayer circles over the ground and in the marquis; continuously preparing the land for the presence of the Lord that night.

“The heat was unbearable at some times during the day and men started to wallow in the cool water of the river. I personally went to the town and piped in various places alerting the people to the fact that God was nearly there at the fields.”

He says that the atmosphere was electric as praise and worship began at 19:00, well-led by singer/songwriter Simon Goodall and an excellent band, with men singing at the tops of their voices.

“The boys went back to their respective tents etc. and guitars, mouth organs and even the pipes played around camp fires until at least 11 PM that night.

“It was cold overnight there in the valley as the river drew the heat from all about us. I was asked to sleep at the altar that night to protect it. So I did that and on day two (Saturday) of the event I was up again at 05:30 preparing to sound reveille on the pipes at 06:00. It was like an army camp from biblical times; a haze over the grass with men rising into the cold morning air,  all preparing for war!”

The War Piper says that after preaching in the morning and showing a harrowing clip from the Passion Of The Christ, Buchan “commanded”  the men to leave the tent and not say a word to anybody for half and hour. What followed was amazing, says the War Piper.

“Hundreds of men passed each other without a word. Then all that could be heard was the wailing of a man crying as he lay over the altar. This sound was the most haunting thing I had ever heard and had a ripple effect as man after man — me included — started to weep openly and uncontrollably. I don’t have any more words to explain it!”

He continues: “Once the half an hour was up I sounded a pipe tune and then all that could be heard was verbal praise to the Lord and the men and boys went off to explore the town and surrounding areas. I went to the top of the town and then marched and piped non stop for half a mile all the way through the high street calling the locals to the evening event and to the Sunday event where the ladies and children could also come.”

He reports that many men made first-time commitments to Jesus at the evening session where Buchan spoke about pain. Hundreds of men also pledged to live as committed disciples of the Lord. The men, apparently tired, went to bed earlier that evening.

The War Piper continues: ” Sunday morning pipes sounded at 06:00 hrs again and the army of God, the Pateley Bridge Division, was again on the march.

“At 10:00 hrs at least one and a half thousand (my calculation) filled the tabernacle tent and it was a beautiful, vibrant joyful event. Men so proud with their wives and girlfriends on their arms, children and families galore.

“I piped Angus onto the stage; I was so honoured.

“Angus brought much laughter, tears, excitement to all and all, done with the full flow of scripture and gospel readings; amazing! Many families came to the stage together all pledging as the men had done the night before to serve the Lord with all that they have.

“The event came to an end and people dispersed in all directions.”

The War Piper says he met men at the event who “had taken the lives of others then had come to the Lord”. He also met men from Holland who plan to start a Mighty Men Conference in their country. But his most memorable meeting was with a man called Reza, a former Muslim who was put on death row in Iran and released a day before he was due to be hanged.

“He was taken to the UN afterwards but watched his name come up on TV along with a few minutes of news (UN officials watched with him) that said that he, Reza had just been hanged. What?!

“To this day he does not know who reprieved him here on earth;  the only explanation being that God brought about his release. For day after day whilst he stood upright in a one metre by one metre cell, yes encased upright and with a constant drip of water upon his head as torture, he prayed to God and only ever smiled at his guards and the judge saying that he did not care if he died for he was going home.

“Indeed the guards had a competition every half an hour to see which one of them could punch him, Reza that is, in his face the hardest.

“Reza became a Mighty Man this weekend and he is now going out into the world to try and bring Muslims to the Lord!”

At this point the dispatch ends, as the War Piper explains that his emotions are getting the better of him. And why not indeed!