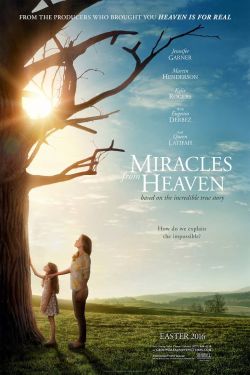 The movie, Miracles from Heaven, “is not only about miracles. It’s about families and struggle,” says TD Jakes, producer of the movie which premieres in theatres across South Africa on Friday, May 6, 2016.

Pastor, author and filmmaker Jakes believes the film is a powerful, provocative story about how a family survives adversities. “It’s also a film about fighting for what you believe in, so you will see faith and you will see fear and people fighting against that.”

Miracles from Heaven is based on the book with the same title and the true story of a girl rescued by an out-of-the-blue accident. It portrays a family that suddenly discovers joy and promise in the most tumultuous moment of their lives.

Central to Miracles from Heaven is a mother who never lets go in her efforts to find a medical cure for her daughter’s illness.

Christy Beam (Jennifer Gardner) is a tenacious, devoted mother whose world is flipped upside down when her daughter Anna (Kylie Rogers) is struck with a rare, incurable disorder. While trying to get medical help for her daughter, Christy begins to experience a series of unfathomable yet documented events that leave not only her, but doctors, family and the community baffled.

According to film producer, Patricia Riggen, the story has universal appeal as viewers will be able to identify with the family’s circumstances in the movie. “We all know how difficult life gets at times and also how precious it is to find kindness, and those moments that give us belief are in the middle of that. I believe faith and hope are essential to human survival,” she says.