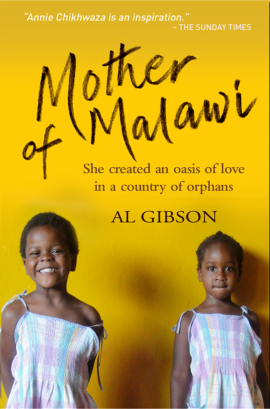 MOTHER OF MALAWI by AL GIBSON

I had the great privilege of meeting Annie Chikwaza before reading this book, so my enjoyment of it had an extra dimension. But even if this had not been the case, I am sure I would still list this book as one of the best Christian testimonies I have read in a very long time.

Annie has lived a remarkable life – and her journey from suicidal teenager in Holland, her country of birth, to founder of a highly successful orphanage in AIDS – ravaged Malawi is a tale definitely worth telling. She experienced sexual abuse as a young girl, a marriage as a young woman that she regretted within a very short time, an abortion forced upon her by her husband, divorce after many years of a difficult marriage and a brutal attack led by her step-children (second marriage) in which she was left for dead. To have merely survived all of that with any degree of sanity would to my mind have been an outstanding achievement in itself.

But this is the story of what our Lord Jesus Christ can accomplish through a life fully surrendered to him. After encountering Jesus in a very real way under the ministry of Brother Andrew and committing her life to Him, Annie immediately joined a group doing street evangelism and has been involved in various ministries most of her life since. In South Africa, where she had moved with her first husband within days of their marriage, she became involved with Rhema Church and initiated a work in Alexandria Township in Joburg during the apartheid years.

After her divorce and remarriage, she moved to Malawi where she once again became involved in projects for the upliftment of those bound up in poverty. This came to an abrupt end after a brutal attack, and she returned to Joburg for a time.

However, Annie felt that God had called her to Malawi and still had a purpose for her there. She did return, and soon felt called to offer a home to orphaned babies. That was 15 years ago, and Kondanani is now a small village, with the oldest children now teenagers.

Annie’s story is the story of how a great and loving God guides, provides and protects. It is also a story about forgiveness. God has been able to work through Annie as a channel of his love because she chose not to hold onto bitterness and anger against those who wished her harm. It is indeed a story that inspires.