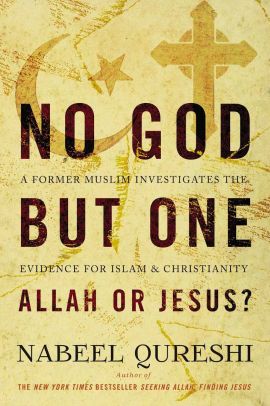 Three years ago I reviewed Nabeel Qureshi’s first book, Seeking Allah, Finding Jesus , in which this American born and bred former Muslim tells the fascinating story of his conversion to faith in the Jesus Christ of the bible.

This process took several years during which he was challenged, as a young man at university, to look into the foundations of his beloved childhood and family faith.

In No God But One: Allah Or Jesus Quresh sets out to answer two questions : “What are the differences between Islam and Christianity?” and “Can we know whether Islam or Christianity is true?”

In answering the first question he compares the notions of Tawhid (Allah is absolutely one) with the Trinity, pointing out that often Christians have difficulty articulating this central belief of Christianity, bringing further confusion to this delicate issue.

The founders of these two “Abrahamic” religions, Jesus and Mohammed are compared in detail, as are the bible and the quran.

This section also looks into the matter of jihad, as well as the Crusades, bringing some historical facts and clarity to these often debated but rarely well understood topics.

In dealing with the second question, Quresh discusses the issues of Jesus dying on the cross, rising from the dead and his claims to be God. All of these are denied by Muslims. Quresh looks at why Christians can have confidence in their affirmation of these claims.

In addition, there is a further chapter each on Mohammed and the Quran, comparing belief with historical fact, as far as we can ascertain from the evidence.

This a highly informative and well articulated book, which leaves the reader in no doubt as to where truth lies. I would recommend this book to anyone who is confused by the supposed similarities between Christianity and Islam.

It is also a useful resource book to those who have contact with Muslims and would like to have a firm understanding of how differently people of this persuasion view the bible, and to be able to answer questions with confidence.

It must always be remembered however that although rational debate and well-timed challenges can have their place in winning souls for Christ as they did in Quresh’s own conversion, it is always love and relationship — and prayer — that will carry the greatest weight.

Nabeel Qureshi holds an MD from Eastern Virginia Medical School, an MA in Christian apologetics from Biola University, an MA in religion from Duke University, and an MPhil in Judaism and Christianity from Oxford University. He is a speaker with Ravi Zacharias International Ministries and lives in Oxford with his wife Michelle, where he is pursuing a doctorate in New Testament studies.