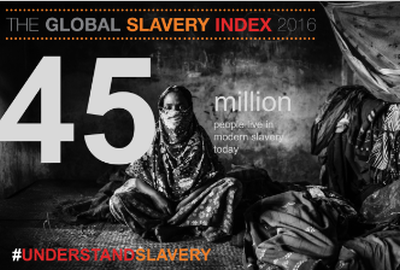 Almost a quarter of a million slaves in SA

Nearly 46 million people across the globe  — including a quarter of a million in South Africa — are living in modern slavery, a system of exploitation that governments and businesses must do more to end, according to the Walk Free Foundation.

The Australia-based rights group recently released its global slavery index, which tracks the number of people stuck in “situations of exploitation that a person cannot refuse or leave because of threats, violence, coercion, abuse of power or deception.” The instances include forced labor in farming, fishing and manufacturing, commercial sex work and forced marriage, reports Bloomberg.

“Governments need to look more closely at illicit labor recruitment, crack down on the illegal companies that provide conduit in which people end up in slavery, and penalize the companies and individuals that are using bonded labor, either directly or in their supply chains,” the group said in a statement. “At the same time, it is important that we tackle the conditions that drive labor migration by creating opportunities within home countries.”

The survey, which was based on 42 000 interviews conducted in 25 countries, found that Asian countries were home to nearly 60 percent of the world’s modern slaves. India was the country with the highest number, 18.3 million, while North Korea had the highest proportion, with 4.3 percent of the population thought to be enslaved, the survey found.

0.453% of South Africans enslaved
The report estimates there are 248 700 modern slaves in South Africa, which ranks in the 27th spot on the index with Trinidad and Tobago and 10th in Sub Saharan Africa.  South Africa has a population of 54 954 000 which means that 0.453 % of the population are in some form of slavery.

Number one spot on the index in Sub Saharan Africa belongs to DRC with approximately 1.13 per cent of its population in slavery. According to the index the average age of victims is Sub Saharan Africa is 23 years and about 50% of them are aged between 17-27.  The types of exploitation in the region are  sexual exploitation and labour exploitation.  The way slaves were created included by a friend, through offers of education opportunities, being sold by their families and by answering offers for employment/migration opportunities. Child marriages remain a huge problem in this area. In South Africa the most reported industries with slaves in them are the sex industry; manual labour industries such as construction, manufacturing and factory work; and drug trafficking.

The nearly 46 million people estimated to be enslaved worldwide is an increase of 28 percent from the group’s last survey, though it says that is likely due to better data collection and research methods. The group said progress had been made since it’s last report, with all countries in Asia except North Korea now having laws criminalising some forms of modern slavery.

Role of government, business and civil society
“I believe in the critical role of leaders in government, business and civil society,” Andrew Forrest, the billionaire chairman of the Walk Free Foundation, said in a statement. Forrest is the largest shareholder of iron ore producer Fortescue Metals Group. “Businesses that don’t actively look for forced labor within their supply chains are standing on a burning platform,” Forrest said.

Major Margaret Stafford National Coordinator of the Anti Human Trafficking programme for The Salvation Army said: “In South Africa we are currently having debates around prostitution and its status in our country as well as looking at child brides and the suppression of witchcraft.

“While the [ Prevention and Combating of Trafficking in Persons Act] Act was given to us in 2013 it was implemented in August 2015 and yet still SAPS need their standing orders finalised and then training needs to happen (and is happening in places).  Getting all the relevant roleplayers working together is another huge factor in the fight against trafficking.”

In Swaziland there is a practice of “royal tribute labour” whereby royal chiefs are alleged to enforce forced labour projects such as cattle herding, she said.