What a privilege it was to be part of the 15th Annual All Nations Congress that was held in Nigeria recently. I had been invited to many of these congresses in the past but just never made the effort to be part of any them, until the recent one held about 3 weeks ago. These gatherings are organised by the Pastor/Ministers Prayer Network – Africa (PMPN – A), an organisation that is part of Intercessors for Africa. The focus of PMPN – A is to network ministers for prayer and intercession in the African continent. They are constantly raising awareness regarding what they consider to be God’s mandate and prophetic agenda for Africa. The network is represented in many countries in Africa and this showed in the mix of delegates who attended the congress. 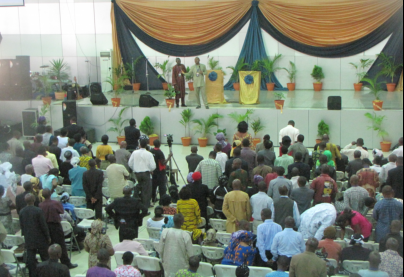 The venue for the congress was the Redeemer’s Camp which is situated just over 40km outside of Lagos. This camp, which is essentially a city to me, is considered to be the largest campground in the world with its own university, schools, post office, supermarkets, etc. Read my previous article on this site to learn more about the exploits of Redeemed Christian Church of God (RCCG).

The theme for the congress was “Expanding your Vision” and speaker after speaker took turns in exploring this theme. The speakers were from various backgrounds which included medicine, engineering, law, academia, church, etc.

The delegation attending this congress consisted mainly of men and women who are involved in some type of ministry in different African countries. They listen to speakers who, under the theme, covered a range of topics including spiritual warfare, discipleship, effective church ministry, national transformation, 7 mountains, health, agriculture, etc. Many things stand out for but let me share some thoughts from Professor Vincent Anigbogu. Professor Vincent lectured on analytic chemistry in the US for 18 years before he answered the call to return to Africa and be involved in fulltime ministry. He now runs the Institute for National Transformation (INT). The professor spoke on the importance of being organised. Using the eagle as an example he told us that when righteous people refuse to pay the price of organising themselves, the worst people in that community will rule over them. 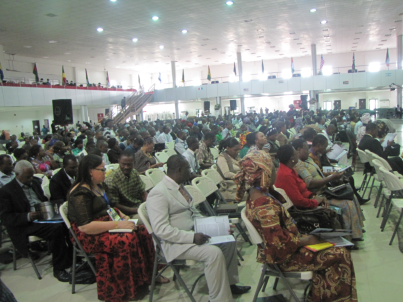 The founder of Intercessors for Africa, Barrister Emeka Nwankpa also spoke at the congress. Reading from Psalm 2 he spoke about the conspiracy that the nations have against our God. He reminded us that the rebellion God has to deal with from people and nations is His biggest concern. This man, who some affectionately call daddy, commands a lot of respect with the congress delegates. In fact the respect that is afforded to senior and seasoned ministers seems to be common in this part of the world. I observed it as well when Mrs Folu Adeboye addressed the congress. She is the wife of Pastor Enoch Adeboye who is the General Oversee of the Redeemed Christian Church of God.

One of the highlights of the congress is a 24 hour prayer watch which starts at midnight on Wednesday and continues until midnight on Thursday. Every delegate is required to spend 10 hours in fasting and prayer during this 24 hour prayer watch. This means you have to be at the conference venue for five 2-hour prayer watches and be engaged in prayer. The prayers covered issues on the continent, the Church, missions, family, leadership, and ended with a time of worship and thanksgiving. My prayer life has been energised as a result.