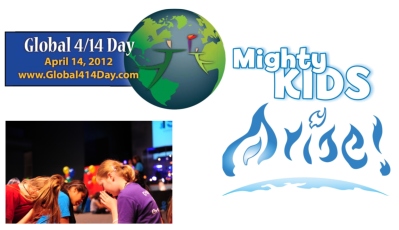 On Saturday (April 14) an international coalition of one-million Christians, known as the 4/14 Window Movement, will partner together in prayer on six continents for Global 4/14 Day. They will be praying specifically for some 2 billion children in the “4/14 Window.”

The 4/14 Window refers to all children between the ages of 4 to 14. During this decade or “window,” most children in this demographic develop their moral and spiritual foundations.

On the same day the Arise movement, which encourages children of the world to express themselves boldly in prayer and worship and prophecy, will be partnering Global 4/14 through Mighty Kids Arise prayer and worship events in 40 countries. There are more than 100 simultaneous events and 140 participating schools in South Africa. Before their decision to partner one another on April 14, Global 4/14 Day and Arise independently selected that day for international prayer initiatives around children — confirmation of the Holy Spirit’s leading!

The partnership between Global 4/14 and Mighty Kids Arise will effectively mean that adults around the world will pray and fast for children under 15, while Godly children will rise up and lead their respective countries in worship and prayer.

International convenor of the Global 4/14 Day, Steve Karges, says: “The response to Global 4/14 Day from Christ followers is nothing short of a miracle. One million Christians, either praying on their own or with a group, for two billion children worldwide is remarkable. God is using Global 4/14 Day to bring Christians together through love, prayer, children’s ministry and the internet.”

There are 2.3 billion children on earth under age 15 and they represent the largest unreached group (to Christianity) in the world. Boys and girls in the 4/14 Window are given priority by evangelical mission strategists because they are more open and receptive to the gospel than older youth and adults. Research shows that nearly 85% of individuals who make a decision for Christ in the United States do so between the ages of 4 to 14. Christian missionaries serving around the world report similar results.

The event’s website, www.Global414Day.com, which was launched last December, is available in 14 of the world’s most-spoken languages. A free Prayer and Fasting Guide has been posted online to download and print, providing guidelines on how to participate in the day individually or in groups.