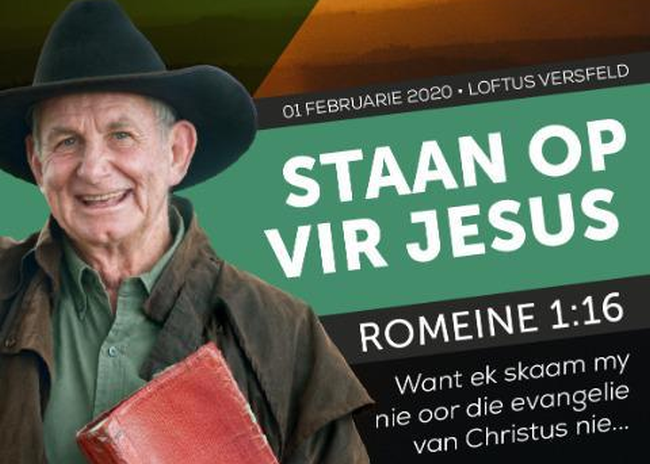 South African farmer/evangelist Angus Buchan today announced that God has instructed him to host a gathering called “Staan op vir Jesus” (“Stand up for Jesus”) at Loftus Versveld stadium on February 1 next year.

And yes, God spoke to Buchan in Afrikaans — well, sort-of. Although he is known to many supporters as “Oom Angus” (“Uncle Angus”), Buchan, who is of Scottish descent and who came to SA from Zambia in 1976, does not speak Afrikaans. But he believes that God wants the event to be especially for the Afrikaans people of the nation and he has decided that initial event publicity will be in Afrikaans.

Loftus Versveld, the iconic Pretoria home stadium of the “Blou Bulle” (“Blue Bulls”) and venue of many Springbok rugby test matches, is indeed an appropriate meeting place for a mass prayer gathering aimed at the Afrikaans community.

The English translation of the above message is:

“God laid it on my heart to hold a gathering called “Stand up for Jesus”. It will take place on February 1 2020 at Loftus Versveld stadium, Pretoria.

“The purpose of the gathering is to encourage Christians to stand up and be counted.” There is too much compromise in our country at the moment, and the devil is running amok.

“We, and our country are in trouble. But if we seek first the Kingdom of God and His righteousness, the Bible tells us that all things will be added to us. Matthew 6:33. Therefore we are going to Loftus to ask for forgiveness on behalf of the nation.

“I firmly believe in the Bible verse: where two or three are gathered together in His name, He is present.

“Those who are struggling with sickness in their bodies, or who are experiencing depression, anxiety and fear, those who are unemployed, those who have lost their vision, must be there. We have an appointment with the living God!

“God will intervene for us.”

Two weeks before releasing today’s call to “Staan op vir Jesus”, Buchan posted a video on his Facebook page [see below], in which he made an impassioned call on believers to stand in faith and wait for God’s deliverance no matter what trials they were facing. In the video he can be seen standing in an almost-dry dam on his farm.

No matter what trouble they were facing — be it the crippling drought gripping much of Sub-Saharan Africa, or political, financial, health or relational struggles, he urged South Africans to “stand because the battle is the Lord’s”.

He said he made the video in response to many messages he had received from men who were crying out in desperation because of their struggles.