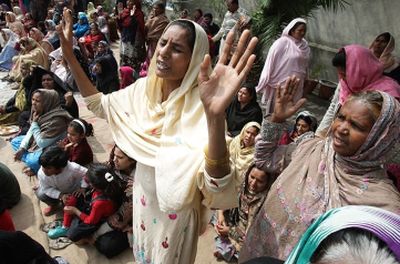 Hundreds of Pakistani Christians on Tuesday held prayer services to commemorate the victims of two Taliban suicide bombs in the city of Lahore, refusing to let terrorism silence their faith.

On March 16, suicide bombers affiliated with the Pakistani Taliban launched attacks against two churches conducting Sunday morning services in the predominantly Christian city of Lahore, killing at least 14 people and injuring 70 others. Although police said that the bombers were stopped by either worshippers or security personnel, the attackers still managed to detonate their explosives.

Christian leaders from across Pakistan  country attended the funeral for the victims following two days of violent protests by the community members against the blasts. According to Reuters, the Pakistani government had called in 5,000 police and paramilitary rangers to control the law and order situation in the region, where violent clashes between Christians and Muslims erupted. Several protesters were killed and about a dozen wounded in the clashes.

Speaking on Tuesday, Manual Mani, a pastor attending the funerals, said the act of terrorism would not stop Christians from practicing their faith within the country. “I would like to tell these terrorists if they think that they can push us back from our faith, they are deadly, entirely, very much at fault,” he said.

According to Open Doors USA, while Christians make up approximately 1.6 percent of Pakistan’s predominantly Muslim population, they account for up to 10 percent of Lahore’s population. Currently, Pakistan is ranked as the no. 8th country where Christians face the most persecution, as believers are often targeted due to strong anti-blasphemy laws and anger over US-led war in Afghanistan.

“The Christian community is a soft target for militant outfits in Pakistan,” Rabia Mehmood, a researcher at the Jinnah Institute, a Pakistani think tank, said. “But generally Christians and other religious minorities are under a constant threat by the extremist elements in the society and rampant religious intolerance.”

Sunday’s attacks have been widely condemned by the international community. Pakistan’s Interior Minister Chaudhry Nisar Ali Khan, speaking at the National Assembly on Tuesday, said the killings constituted “the worst form of terrorism” and reflected the militants’ “frustration” in the face increased military operations against them.

After receiving word of the attacks, Pope Francis stated, “Our brothers shed blood only because they are Christians.” He also has since called for peace in Pakistan, praying that “this persecution against Christians, which the world tries to hide, might end, and that there be peace.”