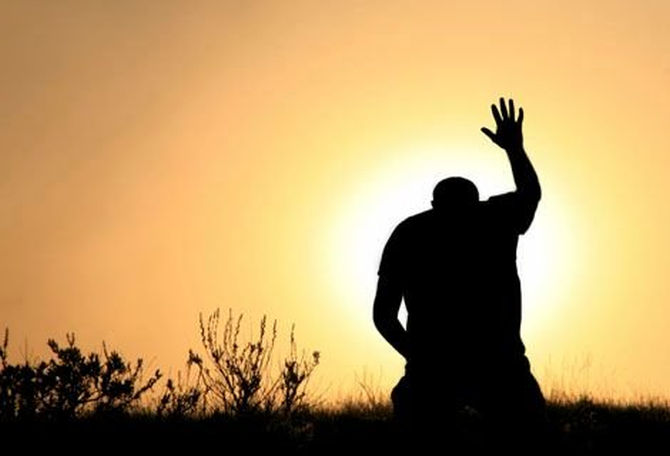 Some of us were discussing the weaknesses of the Western church the other day – on Zoom of course. And I think there was general agreement that shortage of prayer and of the power of the Holy Spirit were right up there among causes.

It’s worth noting that the Day of Pentecost (or the Jewish feast of Shavuot), which we mark this week, followed a ten-day prayer meeting. So it is encouraging that we are in the midst of a globally coordinated ten days of prayer.

The two are clearly linked. For the path to Pentecost is strewn with prayer and waiting – Jesus told his disciples to “wait for the gift my Father promised” (Acts 1.4), requiring patience, perseverance and just being still before Almighty God, waiting in the silence for him to speak.

If we’re really thirsty for the Holy Spirit, we will be prepared to wait for God to fill our hearts to overflowing. Pentecostal churches used to practice this a lot. Those who wanted to be ‘baptised in the Holy Spirit’ were encouraged to attend ‘waiting meetings’ where pastors and elders would help direct seeking hearts.

I detect, sadly even among Pentecostal and charismatic churches, a loss of focus on this essential aspect of a Christian’s armour. There is a sense that teaching on this kind of baptism is ‘old hat’ or perhaps offensive for some of our more conservative evangelical brothers who might argue that we receive all we need on conversion.

But this is not backed up by Scripture. Although there were some doubters, most of the original Twelve became believers soon after Jesus’ ministry began. But they were weak and vulnerable, and the Lord knew that, without the Holy Spirit, they would effectively remain orphans, lacking a close walk with their Father in heaven.

I often hear preachers confidently declaring that the disciples were changed by the resurrection, but it was surely Pentecost that truly transformed them from fearful followers to bold believers.

Yes, there would have been no Pentecost without the resurrection, but Pentecost is a present reality that gives us supernatural confidence to glorify God through the gospel.

A century ago, an extraordinary thing happened to a missionary in Africa, which helps illustrate this point. It was in 1920 that Henry Garlock, of the Pentecostal Holiness Association, volunteered to work among the Pahns, a small but dangerous cannibal tribe in the interior of Liberia. When his wife fell ill with malaria, he asked his bearers to take the short route to the coast for more medicine – through Pahn country. However, the cannibals soon captured one of them.

As Garlock tried to rescue him, a yelling crowd armed with spears, knives and hatchets surrounded the missionary. Praying all the time, Garlock realised he was on trial as a witchdoctor harangued him for about an hour.

When he saw it was time for him to make his defence, he suddenly began to shake violently and was reminded of Jesus’ words in Matthew 10.19f: “Do not worry about what to say or how to say it. At that time you will be given what to say, for it will not be you speaking, but the Spirit of your Father speaking through you.”

Boldly, he began to speak in a language he did not understand…for a full 20 minutes! The crowd hung on his every word, and he realised he must be speaking their language. His speech somehow persuaded them that he and the prisoner should go free, and a rooster was killed in their place. Eventually the tribe gave up cannibalism and turned to Christ.

It’s important to note that, despite its name, the PHA did not subscribe to the doctrines of the new Pentecostals such as speaking in tongues.1

These days many churches tend to ignore some of the important festivals, including Pentecost. And yet attendance at the annual Feast of Tabernacles in Jerusalem will be mandatory when Jesus comes to reign on earth. (Zech 14.16-19)

When Jews celebrate Shavuot today, they rejoice in the giving of the Law of Moses, and for the first fruits of the harvest, both marvellously fulfilled at Pentecost when 3,000 new believers, representing the first fruits of the harvest to come, had the Law written on their hearts by the Holy Spirit (see Rom 2.15, 2 Cor 3.2f) which gave them the supernatural desire to keep God’s commandments.

It was during the Feast of Tabernacles that Jesus spoke of how the Holy Spirit would be poured out on all who were thirsty, causing “streams of living water” to flow from within them (John 7.37f). Tabernacles was a time of giving thanks for the final harvest, for the rain that produced it, and for God himself who had come to dwell, or ‘tabernacle’, among his people.

Large jars of water were poured out during the ceremony as a thank-offering for rain. Now the ‘rain’ of the Spirit will produce a spiritual crop and the baptism with the Holy Spirit (Acts 1.5) will give power for witness (v8). So if lack in this area is among the weaknesses of the church, does the general disconnect with Jewish roots perhaps go some way to explaining it?

It may seem an obvious point, but Pentecost (like the gospel generally) came “to the Jew first”. The first bumper crop of 3,000 souls were already well versed in the Hebrew Scriptures (our Old Testament) which Peter used to explain what was happening – with the help of the Spirit of course! If we were more familiar with the Old Testament and sought to reconnect with our Hebraic roots, we’d be in a better position to explain the gospel – even to those with no background, as I discovered on my last visit to the hairdressers (before lockdown) where an exposition of how Jesus fulfilled the Passover feast opened the door to an effective presentation of the Christian message. Jewish roots and Holy Spirit baptism are an explosive mix!

As our missionary friend discovered 100 years ago, when you’re in a spot of bother, the Holy Spirit will give you the words to say – thanks to Pentecost. As Salvation Army founder William Booth eloquently put to music: “Oh God of burning, cleansing flame; Send the fire!”