‘Not by might nor by power, but by my Spirit’, says the Lord Almighty (Zechariah 4:6)

There is both excitement and anxiety concerning the Sacred Assembly, according to Reverend Moss Ntlha, general secretary of the Evangelical Alliance of South Africa and convenor of the committee of Pastors facilitating mobilisation for the gathering at FNB Stadium on November 19.

“It is always a good thing for the Gospel of Jesus Christ to be proclaimed and I think Angus Buchan has won the hearts of many in the country as an honest South African who seeks to make known the saving message of Christ, however, there is anxiety as the situation is quite troubled in our country, particularly on the higher education campuses around the nation with a lot of unrest, anger and protests.

Timely intervention
“While we can view the unrest on the campuses as political, there is a sense that it speaks of an historical build-up of anger on behalf of young people, many of whom, are fatherless, so to the degree that Angus has a special anointing for addressing issues of fatherhood this intervention is timely,” says Rev Ntlha.

Dr Arno van Niekerk, a leader of several prayer and worship initiatives and author of Enough, What is the Plan?, agrees the Sacred Assembly’s timing is perfect as there is a real need for South Africa to come together at a mass meeting and humble itself before the Lord.

“The scripture that stands out for me is John 17:21 where Jesus prays to the Father, that all of them may be one, Father, just as you are in Me and I am in You. May they also be in us so that the world may believe that You have sent Me.

“This is the time for the Church to humble itself before God and unite in intercession for this nation of ours.” — Apostle Phillip Molefe

“There is something powerful when God’s people unite and it will send a message to the country. I think that is what the Sacred Assembly is about, especially in the South African context of recent months in which there has been much division and conflict.

“It is also very meaningful that the Sacred Assembly is taking place in Soweto where there has been a history of pain and where I believe the Lord wants to start the healing of the nation.

“I am really trusting the Lord that there be as many people of all races as possible, because it is really an opportunity for healing in the country and also for the message of the unity of God’s people to spread through the country,” says Van Niekerk.

Another who believes that timing for the Sacred Assembly could not have been better is Apostle Phillip Molefe, one of the founders of the Evangelical Movement of South Africa.

“This is the time for the Church to humble itself before God and unite in intercession for this nation of ours.

“We are called on to spread the fragrance of love of the Church of Jesus Christ at this time in the history of our country. Although we live in challenging times, the Church is presented with an opportunity to be a light in the darkness of tribulation,” says Molefe.

“We go to the Sacred Assembly humbly seeking God’s face, representing the sin of our culture and seeking repentance so that we can be instruments of healing in our society.” – Rev Moss Ntlha

The fact that the Sacred Assembly coincides with so many troublesome issues in South Africa that need prayer confirms that the timing for the gathering is perfect, according to Afrika Mhlophe, Christian author, Kingdom commentator and Pastor.

He says it is a needed and necessary time to pause in prayer as a nation.

“We have had many prophecies and meetings as congregations and communities for the need to repent, but now is the time for us to come together and humble ourselves as a nation before the Lord.

“We need God’s divine intervention. It is important that we do not miss the opportunity that God has made available to repent and worship Him as a body representing South Africa,” says Mhlophe.

“It would be regrettable to look back and feel as if you should have been at the Sacred Assembly,” he cautions.

While there have been other calls and meeting for repentance in South Africa, Van Niekerk believes they have all prepared the ground for the Sacred Assembly.

Continuous repentance
“This is not a repetition of other meetings; this is the Lord preparing the hearts of South Africans. Repentance needs to happen on a constant basis, because it means a change of heart, a change of mind and thinking.

“I believe that the heart of the nation will change even further at the Sacred Assembly, because many of our prejudices still need to be repented for and we have yet to come to repentance as a nation, but when it happens on a mass scale in Soweto on November 19 it will send out a message that impacts on the whole nation.

“The day is also about the Church uniting in humility before God, seeking His purposes for South Africa, because part of the problem is that so much of what we allow to take place in the country is in opposition to God’s will,” says Van Niekerk. 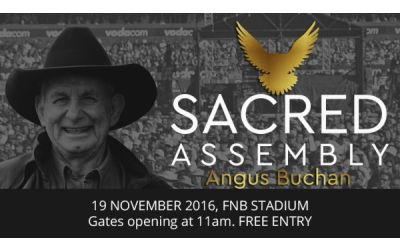 He says it is important for us to be aware that the focus of the Sacred Assembly is on Jesus Christ, the King of kings and not on any man, traditions, or ceremony.

“Uncle Angus has emphasised that the Sacred Assembly is a Jesus event that is taking place for His purposes.”

Rev Ntlha confirms that the Sacred Assembly provides an opportunity to bring South Africa into reconciliation with God through repentance in Jesus Christ’s name.

“We need to humble ourselves, recognise that we as the Church are part of the problem and not innocent to the historical fault lines in South Africa such as absentee fathers and people being divided along denominational and racial lines.

Humbly seeking God
“We go to the Sacred Assembly humbly seeking God’s face, representing the sin of our culture and seeking repentance so that we can be instruments of healing in our society.

“Our credibility depends on how we humble ourselves and how ready we are to admit our own constant need to repent from these sins, especially as the very Bible we stand on has been used to justify the evil of apartheid in the past.

“My prayer is that going forward from the Sacred Assembly we will be good stewards of the authority of the Lord, not with any arrogance that says we have all the answers, but with humility that says we would like to be part of the solution.

“God could do it all, but He has chosen to limit Himself and use us as His instruments by allowing His Holy Spirit to act through us,” — Afrika Mhlophe

“It is vital that as ambassadors for Christ we become part of the answers to the challenges being faced by the country through being willing to share with those who have little, instead of placing ourselves above their problems, because they do not affect us directly,” says Ntlha.

Mhlophe agrees, he says there should be clarity in our minds that this event is not about us, but about coming before God in humility as a body: “God must enjoy the event and be glorified through us being one in worship and praise of His Holy name.

“Likewise, once we leave the Sacred Assembly it is important that we don’t just return home after a ‘nice event’ and let it end there.

“We should seek the Lord’s face expecting to receive direction and fire from Him. When we leave the gathering we should have a clear sense of what actions and steps are that each of us needs to take to extend the repentance of the Sacred Assembly into the revival of South Africa.

“God could do it all, but He has chosen to limit Himself and use us as His instruments by allowing His Holy Spirit to act through us,” urges Mhlophe.

Van Niekerk says the Sacred Assembly is set to be a Spirit led gathering during which transformation is expected to take place both in the hearts of those who attend and in the heart of the nation, which will lead to a change of spiritual and material circumstances in the country.

Shift in the spiritual
“’Not by might nor by power, but by my Spirit,’ says the Lord Almighty’ — I believe that what takes place at the Sacred Assembly will bring about a shift in the spiritual and physical climate of our country through the body of Christ in South Africa uniting humbly across denomination and race divides before the Lord to seek his face.

“I believe this will cause a ripple effect of healing and transformation across the country through the actions of every person that attends the event becoming Christ’s instruments of change once we leave the Sacred Assembly.

“It is up to God’s people to be change in South Africa in a one-to-one context before the sands of time runs out.

“We need to become the hands and feet of Jesus in our everyday encounters. People need to see us as ambassadors of Christ ministering His reconciliation in our communities.

“We are called to initiate healing and change rather than react to circumstances of conflict. Where standards do not adhere to God’s Word we need to stand up and speak out.

“It is up to God’s people to raise the standard instead of being passive. It is up to each believer in Jesus Christ to act in His authority in a manner that reveals Him to those we interact with, from healing the sick to feeding the poor, helping people who are in need and casting out demons,” says Van Niekerk.

“We should move from the natural into the super-natural, because we desire God’s super-natural intervention in South Africa, which also needs to take place through our obedient actions.

“Revival will come, but it is up to God’s people to facilitate revival by being revival in people’s lives and igniting a hunger in them for what we have — Jesus Christ,” he adds.

If anyone has material possessions and sees a brother or sister in need but has no pity on them, how can the love of God be in that person? Dear children, let us not love with words or speech but with actions and in truth. This is how we know that we belong to the truth and how we set our hearts at rest in his presence. (1 John 3:17-19)