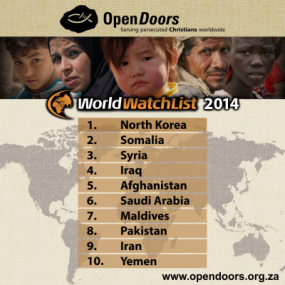 For the 12th consecutive year the hermit communist country of North Korea remains the world’s most restrictive nation in which to practice Christianity, according to the Open Doors 2014 World Watch List (WWL).

However, a major trend which the WWL tracked in 2013 was a marked increase in persecution for Christian communities in states that are commonly regarded as “failed.” A failed country is defined “as a weak state where social and political structures have collapsed to the point where the government has little or no control.”

The top 10 countries where Christians faced the most pressure and violence in the 2013 reporting period of the 2014 WWL are: North Korea, Somalia, Syria, Iraq, Afghanistan, Saudi Arabia, Maldives, Pakistan, Iran and Yemen. For the complete list, go to www.opendoors.org.za.

Overwhelmingly, the main engine driving persecution of Christians in 36 of the top 50 countries is Islamic extremism, with the most violent region being the states of the African Sahel belt where a fifth of the world’s Christians meet one seventh of the world’s Muslims in perilous proximity. The World Watch List 10 contains six failed states: Somalia (#2), Syria (#3), Iraq (#4), Afghanistan (#5), Pakistan (#8) and Yemen (#10). Another newly failed, war-torn state – the Central African Republic (CAR) – made the list for the first time at #16. Libya (#13) and Nigeria (#14) remain very high.

In no other country in the world are Christians so fiercely persecuted because of their faith as in North Korea. Like other North Koreans, Christians have to survive under one of the most oppressive regimes in contemporary times. An estimated 50 000 to 70,000 Christians live in concentration camps, prisons and prison-like circumstances.

For the first time in the history of the Open Doors World Watch List, a sub-Saharan African country – Somalia – is ranked #2. Although the capital of Mogadishu is under more moderate Muslim government control, surveillance is still conducted to root out converts from Islam and the Church has to remain secret. Large tracts of the country remain ungovernable.

Syria is the least surprising newcomer to the top 10, though it is one of the WWL’s highest risers, at #3, up from #11. The civil war continues to rage, perplexing an international community anxious to intervene but seeing no viable opportunity. Atrocities against the Christian community, perpetrated especially by foreign supported jihadi groups, run at their highest level since the war began almost three years ago

The year’s most gruesome headlines have been dominated by the little known Central African Republic, which has catapulted onto the list at #16. The violence is often directed at Christians by the Seleka rebel alliance, which ousted the government in a March coup.
Each year the WWL ranks the 50 worst nations in which to practice Christianity. The Open Doors World Watch List is the only annual survey of religious liberty conditions of Christians around the world. This year the methodology of the Open Doors WWL is published for the first time. It was independently audited by the International Institute for Religious Freedom (http://www.iirf.eu/) to help make the information gathering and calculation process more transparent.