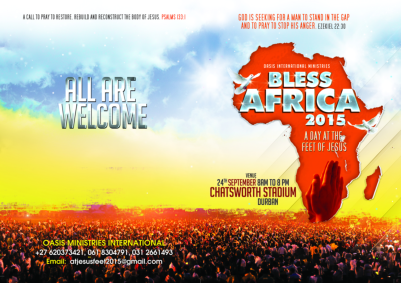 Thousands of Christians are expected to attend a 12 hour prayer event for “healing in the land” at Chatsworth Stadium, Durban, from 8am to 8pm on Thursday, September 24, 2015 (Heritage Day).

“Healing is in the hands of prayer warriors because we serve a prayer answering God,” said Sister Padma Mudaliar, an evangelist from Chennai, India, who is the visionary of the Bless Africa 2015: A Day at the Feet of Jesus stadium prayer event which has the backing of prominent Christian leaders in KwaZulu-Natal.

Sis Padma who heads up Oasis Ministries International and has ministered in South Africa every year for the past 42 years, told Gateway News yesterday that last month during her latest SA trip she sensed great pain and many problems in the country.

“I sought God with much crying in my room. He said I should seek men to stand in the gap to stop the anger in the country.”

Dalphene Naicker who is directing the event planning says they are working hard to achieve in a few weeks what would normally take months of preparation. In an interview yesterday she said they were still arranging prayer and worship slots to be led by different leaders. She said that a key objective of the Bless Africa 2015 event is to promote unity among KZN Christian leaders and to get as many of them and their members to the event as possible. People were being encouraged to spend as much time as possible at the prayer day and many are expected to be there for the full 12 hours, she said.

More information about Bless Africa 2015 can be found on the website http://blessafricadurban2015.org/.