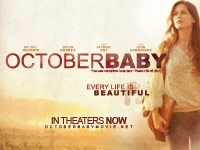 October Baby, an independent pro-life film about a young adopted woman’s search for the birth mother who tried unsuccessfully to abort her, is proving a box office success in the United States where it was released on March 23.

The movie, which is based on a true story, has, as expected, received strong support from the pro-life community but more surprising is the strong public support it has gained. Even the liberal and pro-choice New York Times, ran a report this week under the headline “Film inspired by ‘abortion survivor’ is quiet hit“.

Coming to SA
Gateway News has confirmed that October Baby will be distributed in South Africa by Nu Metro. But the date and format (theatre or DVD) of the release is not yet known.

October Baby co-director John Irwin told the media that he was not an anti-abortion activist. He wanted to make the movie after he heard the testimony of Gianna Jessen, who was delivered alive at a California clinic after a late-term saline-injection abortion. John, 29 produced and co-wrote the film, which he directed with his brother, Andrew, 33. It is the brothers’ first feature film.

“I was shattered when I first learned about the story. I was moved and mesmerized. I wasn’t an activist, I was just someone who was shattered by the truth,” John  told Fox News.

“I wanted to make a movie about the value of each and every life, and how wonderful the choice for life is,” he said in a New York Times interview.

Getting the film distributed was a two year challenge as major studios rejected it, saying the subject matter was too controversial. Eventually  it was taken on by Samuel Goldwyn Films and Sony-owned Provident Films.

The cast includes John Schneider (“The Dukes of Hazzard”) and Jasmine Guy (“A Different World”) alongside Rachel Hendrix in her first lead role in a feature film.

Dallas News.com reports that the film has collected mixed to negative reviews, scoring just 24 percent on the Rotten Tomatoes website. But the aggregation site reports that 93 percent of audiences liked the film.

The October Baby filmmakers believe the gulf between the reviewer and ticket buyer scores dramatizes a rift between critics and conservative moviegoers. “What it tells me is that there’s a gap in values,” Jon Erwin said. “There’s a large group of people who don’t see their values reflected in most movies.”

Supportive reviewers have described the movie as a wonderful story of forgiveness and healing with a twist that shows how God’s forgiveness  can come in unexpected ways.

Not surprisingly, the movie has been flamed by pro-choice activists, who are frightened by its message, according to Catholic League President Bill Donohue.