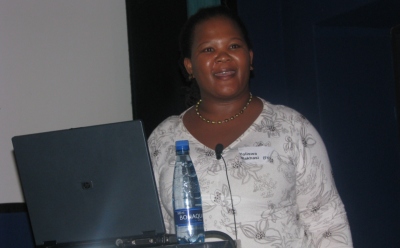 Public comment (or lack of it) on sex, violence, blasphemy and other content in films, magazines and video games plays an important role in setting the standards that the Film and Publication Board (FPB) uses to classify these media.

This emerges from comments by Yoliswa Makhasi, CEO of the FPB and former senior officer of the FPB, Iyavar Chetty, in recent media statements in which they have urged members of the public to make submissions to the FPB on its Film, Magazine and Computer Games Guidelines 2012. The closing date for the submission of inputs is Wednesday, May 16. The FPB says that a full report will be consolidated and made available at the end of the public comments period.

Chetty said that unless people complained to the FPB, they would conclude that the public was satisfied with what was being distributed, or how movies were classified. The number and type of complaints the Board received was regarded as a measure of the standards of the community.

He said, “(Computer) Games are very, very violent, racist, sexist and they are pornographic. In adult shops, pornographic interactive video games are sold. The public should make a fuss to the Board that its guidelines are too lenient or too liberal.”

“The guidelines are there to ensure that our classifiers in executing their duties do so with due consideration of tolerance levels in our society and in line with the rights enshrined in the constitution” says Makhasi.

She said: “… it is important for us to receive commentary and input from members of the public to ensure that our service to them is in line with their own aspirations and tolerance levels.”

The FPB’s 2012 Guidelines for age classification of films and other media can be viewed here.  Public submissions should be made to guidelines@fpb.gov.za. Christian Action Network (CAN)  advises that it is worthwhile making a submission, even if it is only a few paragraphs.

A good idea is to include examples of films you have watched or heard of where the age classification has not been high enough, or the film should have received for example, a blasphemy warning, says CAN.

Moral standards
In its submission to the FPB, CAN says the Board should be aiming for higher moral standards, not simply reflecting  “levels of tolerance”.

CAN commends the board for introducing Blasphemy, Sexual Violence, Imitable Acts and Techniques, Criminal Techniques, and Horror as new classifiable elements in its guidelines.

The CAN submission, which can be read here, makes specific recommendations on stricter standards in various age categories. It also criticises the FPB for failing to deal with the hyper-sexualisation of children and the objectification of women, which cause serious self-image problems and encourage violence against women.

CAN also proposes that  the FPB request that certain aspects of advertising, especially billboards depicting sexual conduct (so-called ‘adult entertainment’), be moved under the oversight of the FPB and receive classifications. The public are continually subjected to sexually objectifying adverts, billboards in particular, of which they have no warning regarding offensive content. If the sexualized content of some billboard advertising were to be used in another medium, like film, it would receive a 13 or 16 age classification. Yet these billboards are on major highways visible to all ages.

The Advertising Standards Authority has no legal teeth or inclination to deal with offending advertisers. They do not do any research and are unwilling to understand the issue of the objectification of women or the implications thereof. In fact, they seem to protect the advertisers and are very dismissive of public complaints, says CAN.

CAN also calls for the improvement and speeding-up of the complaints process –especially regarding magazines. The entire complaints procedure currently seems to be prejudiced against the consumer and biased in favour of the publishers, says CAN.

Doctors For Life International (DFL), a Christian-based medical organisation, provided Gateway News with a summary of its submission to the FPB in which it recommends an entirely new approach to the classification of films and other media, as follows:

Hundreds of thousands of studies have shown that films, videos and interactive computer games have an influence on a society and especially its youth. Furthermore, there is a consensus in many circles that the most vital constitutional right in this respect is the right of minors to be protected against pornographic and other sensitive material.

In our opinion this is incorrect. Films can be a powerful tool to help build society by providing entertainment that at least helps improve humanity, and re-create and rebuild human beings exhausted with the realities of life, instead of being entertainment which tends to degrade human beings, or lower the standards of life and living.

The fact that the grading system is not aggressively enforced also end up having the opposite effect: Any film that is rated as containing nudity and sex turns out to be a flickering red light that attracts mainly teenagers.

DFL therefore suggests a new set of standards which should guide the FPB in their decision as to what can be allowed and what not:

1) The basic dignity and value of human life shall be respected and upheld.

2) Words or symbols contemptuous of racial, religious or national groups, shall not be used so as to incite bigotry or hatred.

3) Restraint shall be exercised in portraying the taking of life.

4) Detailed and protracted acts of brutality, cruelty, physical violence, torture, and abuse, shall not be presented.

7) Illicit sex relationships shall not be justified. Intimate sex scenes violating common standards of decency shall not be portrayed.

8) Restraint and care shall be exercised in presentations dealing with sex aberrations.

9) Evil, sin, crime and wrongdoing shall not be justified.

10) Religion shall not be demeaned.