A pro-life campaigner who prays outside Mary Stopes Clinic in central Cape Town at the start of every working day says he was shocked one morning  when he spotted Archbishop Desmond Tutu’s face and personal endorsement message on a billboard in the clinic.

Peter Thorp, who has spent more than 1 200 hours praying outside the abortion clinic said he  felt like he had been hit by a train when a door at the front of the clinic opened on October 26 and he saw the billboard. He said he leaned inside and took a photograph. On the next day his wife, Terry, sent an email to Tutu asking him to clarify his endorsement of the clinic and why he allowed Mary Stopes to “use your standing with God” to justify the “marketing of death”.

Internal campaign
Marie Stopes head of communications and marketing Leanne Visser said she was aware of Thorp’s concern but could not understand it as Tutu had publicly stated that his position on abortion was pro-choice.  She said the billboard had been used in a once-off internal campaign  at the clinic’s 5 year strategic planning meeting. The poster had been displayed in a reception foyer in a staff-only area which could  only be entered by punching a security keypad.

Asked whether Tutu had been paid for the Marie Stopes endorsement, Visser  said:  “He does accept donations.” But she said that due to marketing changes in their organisation she did not have records, so referred me to Archbishop Desmond Tutu Foundation spokesman Roger Friedman. Gateway News called Friedman’s office and left a request for a call back. Tutu, 80,  is reportedly recovering well at home after minor surgery on Friday. He won the Nobel Peace Prize in 1984 for his struggle to bring peace, justice and equality to South Africa, and is the former Archbishop of Cape Town and a popular and respected international figure. Prior to his operation he was scheduled to be honoured with a continental award from the University of Cape Town on Monday (December 12). Tutu is also the author of a recently released global, children’s storybook bible, which according to him celebrates children all over the world.

The billboard that offended Thorp carries a photo of Tutu under the headline “Choice, Not Chance” which is Marie Stopes’ marketing slogan. The message on the billboard reads:  “Marie Stopes South Africa is doing invaluable work. Through their programmes they are raising awareness and understanding of sexual and reproductive health. They are empowering people and by providing information and access to sustainable high quality services that are giving people the opportunity to make informed decisions about their future and a choice. –Signed Archbishop Desmond Tutu”

Thorp said that during his morning prayer vigil on October 28 the door at the front of the clinic opened once again and he took another picture of the billboard, showing more of the foyer. 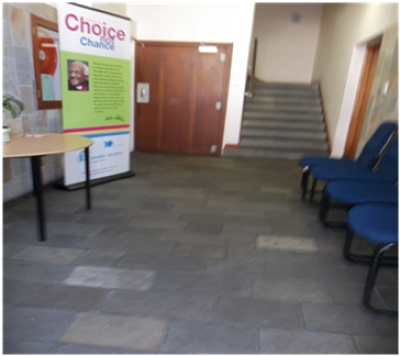 After receiving no reply to her first email, Terry Thorp sent a second email to Tutu, and a copy to the office of the Archbishop of Cape Town. In the second letter she quoted a statement by former Pope John Paul 11 in which he said abortion was a moral evil that violated God’s command “Do not kill”. She said the Archbishop’s office acknowledged receipt of the email and said they would investigate. There was no response from Tutu.

In her first letter to Tutu, Terry Thorp said her husband had been praying outside Marie Stope Clinic in Bree Street, Cape Town at the start of every working day since June 2010 when God led him to take this action after the clinic  “manipulatively” obtained an official order preventing a pro-life  prayer group from praying outside the clinic for 20 to 25 minutes on the last Saturday of the month for 11 months of the year. The group of 30 people now held their monthly prayer vigil at Van Riebeeck Square, some distance from the clinic.

Abortion on demand
Thorp says he will continue to pray for Tutu and for former President Nelson Mandela who signed the Termination of Pregnancy Act into law in 1997. The legislation, which was introduced despite overwhelming public disapproval, permits abortion on demand for any woman (including teenagers without their parents’ consent) up to the 12th week of pregnancy and from the 13th to 20th week if a doctor believes  it necessary to ensure the health of the woman, or if  “the continued pregnancy would significantly affect the social or economic circumstances of the woman”.

The ANC government motivated the legalising of abortion on demand as an antidote to dangerous backyard abortions. But Christian critics, who argue that life begins at conception, view abortion as tantamount to murder and cite much evidence that women who undergo abortions experience far-reaching physical and  emotional effects.

Meanwhile in a press statement released this week Africa Christian Action (ACA) calls on churches to allow time on  Sunday, January 29 (Sanctity Life Sunday) to “observe a solemn and serious time of repentance and prayer for the national sin of abortion” ahead of the 15th anniversary (on February 1) of the legalisation of abortion on demand in South Africa.

Since February 1, 1997 more than one million babies will have been legally killed in South Africa by abortion, says ACA.

To assist pastors in informing and inspiring their congregations to prayer and action, ACA is offering a Pro-life Pack that includes pro-life sermons, prayers of repentance, and Bible Studies on CDs that are available at R35 each. ACA also has pro-life books, especially Make a Difference: A Christian Action Handbook for Southern Africa, DVDs, bumper stickers, T-shirts, Precious Feet lapel pins and crisis pregnancy outreach posters available.

Many of these materials, including pro-life leaflets, can be downloaded from the Christian Action website.