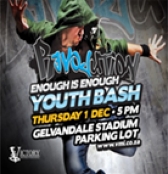 Awesome music, arts, food and more will be on offer at the Revolution Youth Bash in the parking lot of the Gelvandale Sports Field in Liebenberg Road on Thursday, December 1 from 5pm.

The aim of the event is to impact the lives of  youth in the surrounding areas, by kicking off the festive season with a message of God and not of this world, and ministering into their lives the Gospel of Jesus Christ, says event sponsor, Victory Ministries International (VMI) in a media release. The bash is also timed to coincide with the end of matric exams, offering a safe place for young people to celebrate this landmark.

VMI, through its Enough-is-Enough initiative has been working with Port Elizabeth Northern Areas schools for the past two years, building strong relationships with learners and bringing home the message of the dangers of drugs, alcohol, gangsterism, murder and rape to kids growing up in communities that are at the heart of  violence in the city.

Artists such as VMI’s own Revolution dance team and worship team and some local talent will perform. There will be amazing dance items, dramas, skits, songs and ministry that will literally send shivers down your spine, says the media release. VMI is planning to make the bash an annual event.