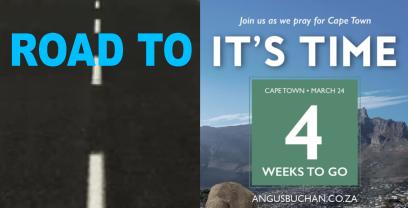 On March 24 Christians from the Western Cape and all over South Africa will gather in the Mitchells Plain area of Cape Town to pray and repent for the city — in the grip of a severe drought and social evils — and for South Africa. In this fascinating series Road to It’s Time, missionary, intercessor, author and historian Ashley Cloete shows that the road to the historic spiritual assignment in Cape Town on March 24 goes way back into the mists of time — and the heart of God. Read on about the spiritual climax that is approaching and be part of It’s Time.

Episode 1: Towards a great climax

Fasten your seatbelts! Things seem to be hotting up in the spiritual realms towards a spiritual climax into the transformation of the Mother City of South Africa that could ultimately impact the whole nation. I believe that God had a redemptive purpose for the Cape lined up from the earliest of times. The initial purpose of a halfway post in the 1600s to provide food and water for the passing ships was in line with the divine plan – spiritual nourishment and refreshment for people of many maritime nations that would be calling here. I see in this a forerunner of the prophesied revival that will start here and bring blessing and healing to the rest of the world.

When God nudged Pastor Angus Buchan to have the It’s Time event in Mitchell’s Plain on 24 March 2018, it seems more than mere coincidence when one considers that the venue of the event is sandwiched between Mitchell’s Plain and Khayelitsha.

These two apartheid era products are the result of massive relocation of people. In the vast Mitchells Plain residential area there are more than half a million predominantly “Coloureds’”living today. Teenage pregnancies, drug addiction, satanism and gang-related crime are issues which had been rare in the areas where the parents and grandparents of the present residents came from following Group Areas legislation of the 1950s. Today these are big challenges. The United Democratic Front (UDF) was started on August 20 1983 in the Rocklands Community Hall in Mitchells Plain – the day when the diabolic tricameral parliamentary system was due to be implemented. The grand idea of the apartheid planners was to divide and rule. ‘Coloureds’ and ‘Indians’ were destined to get an elevated status above “Blacks”. The UDF wrecked that scheme, ushering in the democratic era of our country in the process.

Khayelitsha was the “new home” where “Blacks” – the bulk of them isiXhosa speakers – were moved to after the forced evictions from the informal settlements of Werkgenot, Crossroads and KTC in the 1970s and 1980s. Well over a million ‘Blacks’ are living there now, including many from various African countries. The challenges of poverty and xenophobia are daily realities for the inhabitants as they are for the nation as a whole. At the 1983 occasion in the Rocklands Community Hall, a Cape trade unionist, Oscar Mpetha, was elected as the first UDF President. Cyril Ramaphosa the State President since 15 February 2018, was the COSATU leader at that time. He subsequently became the pivot of the special constitution of the early 90s that was forged in the transition to the democratic era.

Spiritual warfare
Bible scholars suggest that some form of spiritual warfare was raging after a beautiful proud archangel was thrust from the heavenly realms when he wanted to be like God. This is tersely described in Ezekiel 28:1 -19. Taking it as a given that satan could take on various forms, Paul, the missional apostle, would aptly state that he masquerades as an angel of light (2 Corinthians 11:14).

In the course of my historical research of spiritual dynamics at the Cape I concluded that much of this warfare was possibly raging over Southern Africa because the Almighty had a redemptive purpose for the Cape lined up even before the start of recorded history.

I came more and more to the conviction that a climax has been building up over the centuries. In the next few weeks I will attempt to give a summary of this in Gateway News. Symptomatic of the spiritual warfare are the storms that have been raging at the Cape since time immemorial. The events of the centuries are depicted in a significant name change from the Cape of Storms to the Cape of Good Hope. Ever since the battle rages on…

Much of this spiritual battle is reflected in the names of our mountains with Christian connotations. We have the Lion’s Head and Rump, the Twelve Apostles and Table Mountain. Christians have been seeing the Lion of Judah (who will ultimately break every chain) sitting at the table with his twelve apostles. There was a Duivenkop (Doves’ Peak) in the early days of the settlement that was corrupted into Duivelskop (Devil’s Peak). This process got linked in a legend to a certain Dutch colonist with the name of Van Hunks who supposedly defeated the devil in a smoking contest on the slopes of the peak.

A view was prevalent in the 17th century that the indigenous peoples of Africa and America were uncivilised, barbaric and wild. A persecuted Czech bishop of the United Brethren, Jan Amos Comenius, who had a special vision for the Church to oppose that view, suggested that the Church should erect prophetic signs which would usher in the coming kingdom of our Lord.

At that time something happened at the Cape of Good Hope, which could have prepared the way for erecting a special sign. Before the Dutch East India Company vessel Haarlem was shipwrecked on the rocks of Table Bay in 1647, the the multinational trading company the VOC wanted to establish a halfway post for mainly their ships to provide food and fresh water. The indigenous Khoikhoi were prior to this tragic even perceived as a mighty barrier in the way of such a venture. The shipwrecked Dutchmen were forced to stay at the Cape for five months, until another homeward bound ship was able to pick them up.

After the shipwreck, the crew was forced to see indigenous people in a different light than the prevailing perception in Europe. It is special how the Remonstrantie, which was written by two stranded crewmen, Leendert Janssen and Nicolaas Proot, contradicted the perception held of the indigenous people of their day and age. They referred to “a popular error”, noting: “Others will say that the natives are savages and cannibals, and that no good is to be expected from them.” The Khoikhoi impressed the pair as possible candidates for “the magnifying of God’s Holy Name and to the propagation of the Gospel.” Their vision thus somehow merged with that of Bishop Comenius. Sadly, the Church at the Cape did not live up to that. Slaves were either rejected or barred from the first two Cape churches. The indigenous Khoisan people were regarded as game to be hunted down.

The potential of the indigenous Khoikhoi – to be blessed by godly colonisers – was not realised. Instead of that, storms – mutual animosity and skirmishes that culminated in the brutal apartheid oppression of the 1980s — became the order of the day. Jan van Riebeeck, the founder the colony at the Cape that paved the way for the colonisation of South Africa, boasted how he had intoxicated the Khoikhoi and subsequently robbed them of their cattle and their land. The Church should be the last to blame Van Riebeeck for the alcoholism that would become such a scourge in our nation. He was a mere mortal who made mistakes like all of us. The missionary movement that blessed our nation so much, also benefited from the land grabbing via gifts from the respective colonial governors.

The Dutch colonisers – along with opportunistic Germans from the low social classes — speedily sunk into grave moral degradation. This was checked to a great extent by the pious French Huguenots who arrived from 1688. This was a forerunner of so many other examples down the centuries of how foreigners – refugees included – became a blessing to the fledgling nation at the southern tip of Africa.

In 1688 however, the clash of religious ideologies got clear contours. Devout Islamic religious rebels from the East arrived at the Cape as political prisoners propagating their faith among the politically unfree non-Europeans.

By the 1800s much of the opposition to racial segregation in South Africa started in District Six, the former slum area near to the CBD. Mitchells Plain and Khayelitsha can be regarded as the ideological and spiritual heirs of District Six.

The practices and hurts inflicted by the stormy apartheid society was often the reason for determined resistance in the 1950s. The female Xhosas at the Cape reshaped their meetings to provide more practical instruction and opportunities for community activism. The manyanos (the Xhosa word for prayer unions) became instruments of “Black” empowerment — virtually second to none. Testimonies, preaching and spontaneous prayer became the lifeblood of “Black” Christian groups. In the manyanos they could develop their potential as orators without first having to be literate. The resilience of women who were living in the Cape as “squatters” —  illegally at that time according to apartheid regulations — ended in the victory at the Battle of Nyanga (1981). This ushered in the scrapping of influx legislation in 1985.

Pastor Walter Ackermann, who died last year was a devout Christian. He was impacted by the blessed revivalist Docks Mission in the era when Bo-Kaap, Roggebaai and District Six formed a politico-religious entity. For many years he was the pastor of the Docks Mission Church in Lentegeur, Mitchells Plain not very far from the venue of the It’s Time event on March 24. That church was one of the first places in the Cape that President Nelson Mandela visited after his inauguration in 1994. Madiba publicly acknowledged that the teaching of Pastor Salter Ackermann and Rev Theo Kotze of the Sea Point Methodist Church on Robben Island had contributed to his spiritual evolution towards a conciliatory attitude to his former oppressors. I dare to predict that Mitchells Plain will become an unforgettable symbol of a new beginning of our rainbow nation on March 24.

Next week we will examine in this series how the Cape became a blessing to the world via two devout men of God and how a spiritual battle between Islam and Christianity evolved as part of a global drama that unfolded in this part of the world.