South Africa’s first 40 Days For Life prayer vigil against abortion has reached the three quarters mark. Gateway News asked coordinator Collette Thomas for an update on their 7am to 7pm prayer campaign opposite the Marie Stope s abortion clinic in central Cape Town.

Collette responded with a few emails that give a glimpse into what she and her fellow Christian pro-life campaigners have experienced in recent days as they represented South Africa in a campaign that is running simultaneously in more than 200 other cities around the world.

In one of her emails she said that after 10 hours of prayer on Wednesday, February 27 she started to become despondent as she began to doubt that they were making a difference. But then God performed a miracle, she wrote.

“A young lady walks by and turns around, stares at me and asks, ‘Do you serve a forgiving God?’ I look up from praying and the women has tears in her eyes. My answer was yes but before I could ask why she opens up and says she has had an abortion a year ago and nobody knows she’s having nightmares. She explains that she spoke to her pastor but she just can’t get over that she killed her baby. I counselled Melia on the spot and explained that God forgives her but she needs to forgive herself. I advised her to speak again to her pastor and she can speak again to me anytime.”

In another email she says that people keep saying that their 40 days banner is offensive and that they are going to hell. The wording on the banner reads: 40 Days For Life – ‘Before I formed you in the womb, I knew you – Jer 1:5 – Praying for an end to abortion and offering hope. In the same email she says that on the previous day they had to put up with 100 nude cyclists passing by with the approval of city officials. With her email was a newspaper report about Cape Town’s third annual ‘Naked Bike Ride’ on March 9, which was held as a precursor to the Argus Cycle Tour and in protest of car culture and oil dependency. 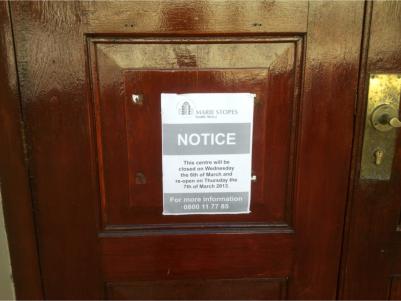 She also emailed a photograph of the door to Marie Stopes with a notice advising that the clinic was closed for the day. She commented: “The morale of office workers [is] down. The director of Marie Stopes South Africa, Denise Hunt brought a motivational speaker to speak to the staff. The office has closed for the day. So let us storm heaven with our prayers, that staff may be convicted and leave this work and that God provide other work for them that gives God the glory. That these doors will be closed forever. Amen.”

At the start of the 40 Days For Life campaign Thomas told Gateway News: “We will be outside doors 12 hours a day to pray to stop abortion in our country, to close the abortion clinic and to change the hearts of the staff. This might seem impossible, Luke 37: 1 Nothing is impossible for God.”

Since abortion on demand was legalised in South Africa in 2007, more than 1.1 million babies have been killed legally in clinics and hospitals.

At the 30 day mark the international 40 Day For Life website records that 368 babies have been saved from abortion so far. Testimonies on the site include lives spared, babies adopted, pastors participating and abortion clinic owners miffed.