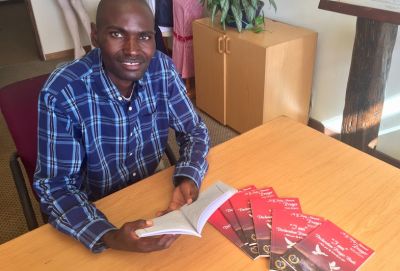 Port Elizabeth Christian School principal and evangelist Blessing Marunga has written a book of prayer declarations — and he is trusting God for partners to help him get it into the hands of as many young people as possible at no cost.

He established Blessing Christian Academy in PE in 2010 through a remarkable journey of faith after arriving in the city from Zimbabwe with no financial resources. In recent times he once again had to call on his faith in Christ, his passion for young people and his steely determination when the school went through a crisis due to the financial strain of running separate high school and primary school campuses.

But his academy is back on track again at new premises in Mount Road and he is once again zealously pursuing his passion for investing in the academic and spiritual development of young people.

Marunga says he wrote his book — ‘I am’ — Declaration Prayer Book — over a period of four to five months last year and with the help of a local printing company got enough copies printed to give books to all of his students.

He says the book, which is based mainly on the biblical book of Ephesians, consists of short declarations which can be used as prayers and which are designed to build young people up in the knowledge and assurance of their purpose in Jesus. It is also a tool for parents — especially fathers who are the priests of their home — to pray with their children, he says.

“We want to secure the triumph of our Lord Jesus Christ in Port Elizabeth among our youth — because if we can get our youth for Christ can you imagine the next 10 years — the transformation of our city?” Marunga says.

Starting at his own school Marunga has kept up an amazing record of hosting visiting preachers to edify his students for an hour on every Tuesday since the school began some seven years ago. Every school assembly also begins and ends with singing about the blood of Jesus, he says.

“Old learners who come and visit ask: ‘Are you still singing about the blood of Jesus?’ “The point is, that everybody walks out of this school knowing what the blood of Jesus has done for them. We believe at a later stage they will draw on that power, that union, that fellowship, that intimacy that comes with the blood,” he says.

Marunga has previously partnered with other schools in prayer walking initiatives and he has pioneered youth outreach initiatives such as  producing worship CDs, launching a youth magazine and holding worship concerts in which his students have played a key role. He wants his students to know and use his new prayer book so that they can be ambassadors for it in possible upcoming outreaches at other schools.

Anybody who would like to partner with Marunga in making his prayer book available for free to young people and parents can contact his at 072 946 3611 or evangelistblessingmarunga@gmail.com