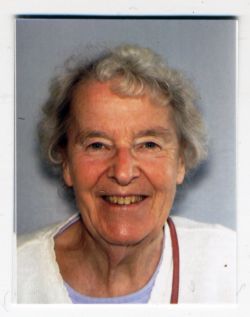 An English housewife and teacher who returned home one day to find her husband had died of a heart attack can have little imagined how an extraordinary new life adventure was about to begin.

Esther Lever was subsequently launched on an amazing journey which has taken her to more than 50 countries around the world in search of Jews wanting to return to their ancient homeland.

And this currently involves regular trips to the Ukraine, where it is reported that many frightened Jews are desperately seeking refuge in Israel as the escalation of political trouble in the region has apparently spilled over into a rise of anti-Semitism.

Working as a volunteer for Ebenezer Operation Exodus, Esther has literally gone to the “ends of the earth” in her quest – including the snowy wastes of Russia’s far-eastern tip (opposite Alaska) and the southernmost tip of South America at Terra del Fuego.

Ebenezer is a Christian organization set up to help Jewish people wishing to return to Israel (or make aliyah is it is known). Many of them represent families who have been scattered for thousands of years, often in remote parts of the world, after being forced into exile, first by the Babylonians then by the Romans, but are restricted from emigrating through lack of documentation and finances.

Millions have already returned to the Holy Land in this way since the Jewish state was re-born in 1948. Many have sailed on ships from Odessa on the Black Sea while others have flown on planes specially chartered for the purpose. And in the process they have fulfilled ancient biblical prophecies about the exiles of Israel being gathered from every corner of the globe.

Jeremiah wrote: “See, I will bring them from the land of the north and gather them from the ends of the earth. Among them will be the blind and the lame, expectant mothers and women in labour; a great throng will return. They will come with weeping…” (Jer 31.8f)

Esther has seen literal fulfillments of these words: “I have helped blind people, pushed others in wheelchairs and carried new-born babies. And I’ve witnessed the weeping when they saw their land for the first time.”

The motivation for Christians to help is their understanding that Israel – described as the “apple of his eye” – has always been very precious to God and that their spiritual future as a nation is linked with their prophesied return to the land where Jesus trod.

The New Testament speaks of how Israel, blinded in part to the identity of their Messiah so that he could go unhindered to the cross for the sins of the world, would ultimately have their eyes opened and worship him along with Gentiles.

Esther said they are prepared to go to the ends of the earth for a single Jew wanting to return and cited the case of how they flew, and then drove, through snowstorms for many hours to reach a 78-year-old man living in the depths of the former Soviet Union.

Following her husband’s sudden death, Esther felt a call to Israel through a book by Derek Prince called Appointment in Jerusalem. Now (with Russell Bowles) she has written of her own experiences in The Ingathering of Israel, published by Sovereign World.