For those working in the field of social justice, the presence of both highs and lows of the ‘justice’ journey is something quite familiar. Like reaching deep into a bucket filled with a wide variety of sweets and picking out a single one at the bottom of the pile.

You never really know which colour, flavour or brand is the next to surprise you until your fingers are intrigued by an interesting and seemingly unfamiliar texture. You grab hold of it and notice the sound of increasing excitement amongst other participants in the room. You are blindfolded and the first to take a turn in a motivational teambuilding exercise called ‘pick a sweet and tell an inspiring story’. It’s the icebreaker exercise with the eyes of fellow participants fixed as your hand retracts from the huge stockpile of sweets. 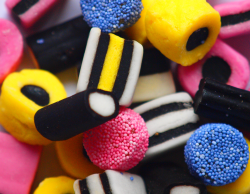 Overwhelmed with smell
You are about to set the tone with your inspiring story when suddenly you are totally overwhelmed with the smell of…….liquorice. Your profound awareness of the smell is fuelled by a Grade 3 experience where Mr Rogers forced you to finish an entire bag of liquorice sweets for eating in class. You don’t eat liquorice; you don’t like liquorice and had nothing to do with the entire bag you now had to consume. The bag of liquorice belonged to Johnny who sat next to you. He briefly left class to go to the bathroom and you were falsely implicated by the class bully for eating whilst Mr Rogers turned his back on the class. It was a day you wished you forgot. Being at the right place [school] for the right reasons [to learn] catapulted into something quite unexpected. It was a Monday morning and you instantaneously became the laughing stock of the class with an irritated teacher and a best friend blaming you for destroying his tuck.

The blindfold is removed by the teambuilding facilitator and your fear of public speaking is now compounded with the nauseating effect of both liquorice incidents – the past and the present. Forty delegates and eighty eyes stare at you – the expectation for inspiration is almost tangible. Despite a confluence of inconsistent thoughts, feelings and uncertainty about how your inspirational story is going to unfold and, most importantly, how it is going to be received by those you are tasked to inspire, you make a decision to rise above the here and the now by telling the story of Charlie Thompson.

You begin the story by lifting up the sweet and relaying how the idea for Liquorice Allsorts came out of a moment of adversity. You continue: As folklore has it in 1899, a sales representative for a sweet company in the United Kingdom, known as Charlie Thompson, supposedly dropped a tray of samples he was presenting to a client in Leicester. Horrified that the various sweets had become mixed up, and quite possibly foreseeing imminent dismissal from his job if he did not close a sale, he hurriedly tried to rearrange them back to their original places. However he was prevented from doing so by the client who was intrigued by the look of the mixture and promptly placed an order. Thompson’s spillage, though disastrous at the time, led to something that would become astoundingly successful.

Extra miles
With available resources outnumbered by the needs and inequalities that surround us, we are often called to go the second and third extra mile in addition to the first one. We get tired and disheartened at times and may question whether justice really exists and whether we will ever experience the privilege of seeing it come to fruition.

I recently engaged with a member of an international crime syndicate who volunteered information which we gathered for a community engagement project relating to human trafficking, sexual exploitation and organised crime. For a moment I became disillusioned by his first-hand accounts of ‘high-level’ corruption and abuse of power by esteemed members of society who set out to exploit that which they are supposed to protect. I was nauseated by the names, some of whom I had the privilege of meeting personally. After a debriefing session with my lovely wife, I was reminded by her that ‘there is nothing new under the sun’ (Ecclesiastes 1:9). In a sobering flash I realised that the experience was just another one in a long list of past engagements with the darker side of life. I had a liquorice moment and had to snap out of it…

Our God is intimately acquainted with the world in which we live (John 16:33) and knows very well that we, as Christians and social justice activists, have our limitations. By showing up, being available and allowing God to intercede, our engagement with adversity can be transformed into an innovative Liquorice Allsorts moment.