A monthly column by Vivienne Solomons who is a legal consultant who passionately believes that God wants His people to make a difference right where they are and to stand up for what is true and just. She is also passionate about encouraging young women to walk victoriously with God and she is engaged in a challenging faith journey as a parent of a child with special needs.

Recently, a friend shared with me how hurt she had been in a relationship and how the other person involved hadn’t even said “sorry”, something she had expected but more than that, something which, at least from her perspective, would have made all the difference to their relationship going forward.

My conversation with her got me to thinking about the importance of an apology and why so many of us – myself included – use the word “sorry” lightly, if at all.

Apologies serve a number of different purposes. First, they serve to highlight the fact that we cannot be right all the time and that we are able to acknowledge this; secondly, apologising makes it clear that the other person’s welfare and wellbeing matters to us; and third, apologies can help in minimising the conflict that has arisen.

An apology is deemed appropriate when we become aware that the other person has been hurt. Unfortunately, many of us can find saying “I’m sorry” difficult, even when we believe we are, to some extent, at fault. This is because it may be considered a sign of weakness or an admission of defeat. Interestingly, this is not how many of us view an apology when we are on the ‘receiving end’; then it is seen as a mark of strength and maturity and the ‘right thing to do’. 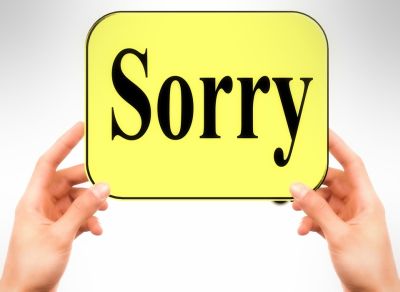 Others of us may have difficulty recognising situations that require an apology or may not even appreciate the value of an apology in a relationship. But it is an ability that can be acquired and employed rather than defending ourselves and bringing counter accusation to the other person (I know that I have been guilty of the latter on more than one occasion).

I am certain you have experienced the power of a sincere apology – anger evaporates, resentment disappears and icy walls melt when an “I’m sorry” is heartfelt and accompanied by remorse. This is because a sincere apology recognises that hurt was caused and moreover, acknowledges it as something which needs to be addressed appropriately.

Of course, there are instances where the words “I’m sorry” are misused. For example, the person who apologises even when no real offence has been caused because they believe that they are burdening someone by asking for something, such as the time of day.

The words “I’m sorry” may also be used by the apologising person as permission to say or do something that may potentially offend the other person. Haven’t we all said these words at some point while in the company of others – “sorry I have to take this call”? Then there is the reluctant apology, which is not at all sincere but one given out of obligation and designed to reduce conflict and avoid condemnation.

The one that I have employed too many times to count, but in my defense, not always consciously is “I’m sorry that you felt that way about what I said”. The problem with this type of apology is that while it includes the word “sorry” it implies that the other person is too sensitive and easily offended for little or no reason.

In closing, while I certainly need to become more aware and even more intentional about saying “sorry” to those I have wronged, I can’t help but wonder if we as a nation are holding our collective breath, waiting for an apology  that has thus far not been forthcoming – after all, poor decision making, mismanagement of public funds and widespread corruption at every level of government have caused much ‘hurt’ in the broadest sense of the word to the people of our great nation and consequently created numerous opportunities for the word “sorry” to be spoken.

But let us continue to stand in faith that the day will eventually dawn when someone brave enough will be ready to stand up and in all sincerity acknowledge the wrong that has been done, the ‘hurt’ that has been caused, how will be willing to take responsibility for their actions – and the actions of others – and so usher in a new chapter in South Africa’s history. I pray that day is not far off.