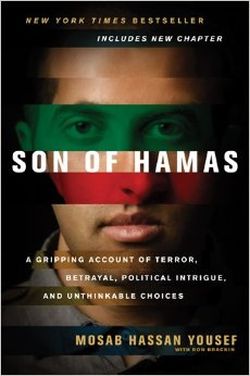 In Son of Hamas we are given a unique and intensely personal perspective on the Middle East conflict.

Mosab Hassan Yousef is the son of Sheikh Hassan Yousef, a founding member and leader of Hamas, the terrorist organisation responsible for countless suicide bombings and other attacks on Israel. Mosab now lives in the USA, but the first 29 years of his life was lived in the occupied territory of the West Bank where his father was a well respected spiritual leader, with a great compassion and love for the people of his community of faith — which of course was Islam.

Mosab was raised hating the Israelis. When he was 17 he decided he needed guns and managed to organise buying some. This turned out to be a very bad move — firstly the guns did not work, and secondly it was not long before he was was arrested and imprisoned by the Israelis. During this first imprisonment he was recruited by the Shin Bet, Israel’s internal intelligence service.

And so began 10 years of betrayal and intrigue. The Shin Bet gave protection to both Mosab and his father in order that Mosab could continue in his insider position in Hamas. Many lives were saved through the information that he passed on.

In 1999, Mosab was invited to attend Christian bible classes. He agreed to do this as he was bored at the time and was curious about Christianity. Thus began a six year spiritual journey which culminated in him being baptised in 2005. Over the intervening years he came firstly to appreciate the teachings of Jesus. The ways of love and forgiveness, rather than the hatred and revenge that he experienced around him drew him almost immediately. Then as he continued to pursue truth he came to a knowledge of Jesus as God.

In 2007, fearing for his life, he left Palestine for America and was eventually granted political asylum. His family, who he continues to live dearly, have disowned him.

The recent print of the book has a 2011 Afterword, which tells of the difficult process of getting asylum. It also tells of his ongoing and deep friendship with his former Shin Bet handler and the sacrificial role he played in securing this asylum by verifying the truth of Mosab’s story.

Mosab’s motive for writing this book was to set the record straight as to much of what is happening, and has happened in the occupied territories, and to bring hope that there is a better way to go forward. And that is the way of hearts changed by the love of Jesus.