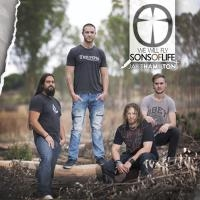 SONS OF LIFE: WE WILL FLY

This week it is my great pleasure to follow up on an article Andre did on the 7th of November 2013 on the collaborative efforts of Jake Hamilton from Jesus Culture and our own homegrown boys, SONS OF LIFE, from Spirit Word Ministries in Stilfontein in the North West Province.

This journey started when former Jesus Culture manager Jerry Niswander traveled with filmmaker Darren Wilson, promoting his movie Father of Lights in South Africa.  They visited Spirit Word Ministries and soon their relationship was established when Jerry “could listen to their worship the whole night” subsequently Jerry is now the manager of SONS OF LIFE.  A live recording was the next step and after their trip to the Annual Bethel Conference in Redding California, and they returned with planning well under way for this scheduled recording in November 2014.  In preparation for this, Jerry and Jake Hamilton visited Spirit Word Ministries in September 2013 and behind the instruments hearts where knitted together, leading to a unanimous decision that Jake had to be part of this live recording.

I was pleasantly surprised by their version of AT YOUR NAME and What a friend I’ve found by Martin Smith!  I like the confidence these guys walk in, bringing their own feel and fingerprint to every one of these well known songs.

This album is a combination of covers of original songs by Jesus Culture, Martin Smith, Phil Wickham and Jake Hamilton.  This recording does however also include some of SONS OF LIFE’s own original songs.  With this live recording taking place in the home church of these three brothers it was great hearing South Africans raising their voices to this compilation of National and International sounds, underlining the fact that we as a nation truly are ready to take our place on the international stage! South Africa truly has got a sound to offer, being part of the international sound of worshippers raising our praises to our ONE AND ONLY TRUE GOD!

This really turned out to be so much more than what I had expected.  I will definitely be keeping my eye on SONS OF LIFE as the doors seems to be flying open for them on the local as well as international scene. The album can be purchased online. The group will be doing a national tour in April/May.

Until we worship together again, let the worshipper in you arise.