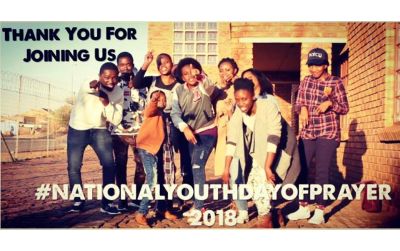 You might have seen the video of a young man calling his fellow youth to pray for South Africa last week.

If not take a look at this:

The young man in that video is Themba Lethu.

His call for a National Youth Day of Prayer spread like wildfire.

When I received it on WhatsApp, my fingers couldn’t move fast enough — that’s how badly I wanted to share it with others.

With as much negativity and fear as we’re bombarded with, what a joy it was to see something this incredible.

For years, I’ve heard people declare revival over South Africa — for me, Themba’s call for the youth of South Africa to pray was confirmation that revival is here.

Aged 27 and 1.2 metres tall, Themba said one of his biggest challenges growing up was being a “short individual”.

He spoke of the abuse, agony and ridicule he went through because of it, especially in his teens. During his adolescence, he saw his peers developing into bodies that reflected their ages while he remained stuck in a body that wasn’t.

“I wasn’t happy with my own image in the mirror,” Themba recalled.

Feeling unloved
Despite the immense love and support his family, particularly his parents showed him, Themba said he felt unloved.

As a filmmaker, writer, director and actor who starred in well-known TV Shows like Rhythm City, Soul Buddies, as well as the movie Mampara, various TV commercials and even international projects, it wasn’t the rise to stardom that changed how Themba saw himself, but rather giving his life to the Lord in 2006.

“In 2009, I received the baptism of the Holy Spirit and that transformed me.”

This happened at a 2009 Christian Camp, Youth for Christ, in Magaliesburg.

Themba recalled the fire and zeal he saw in other young people at that camp and said it set him ablaze.

That encounter created a hunger in Themba that set him on a path of abandoning the things he’d once moulded himself around to going all in for God.

Extremely well-versed in Scripture, almost every second sentence Themba spoke in our interview was about his journey to renew his mind. It was in this act of continually changing his thought patterns to align with the Word of God that he received much-needed breakthrough about how he saw himself.

“It was a journey. It took a long time to understand I’m fearfully and wonderfully made. What kept me going was God’s love for me — that’s the beauty of Grace.”

To the naked eye Themba might be 1.2 metres tall but what a giant he is for God’s Kingdom!

Regarding how he sees himself now Themba said: “It doesn’t matter the shell — my spirit is in the likeness of God. That is what one must identify with.”

Following his experience, the restoration of Godly identity in the hearts and minds of young people is something Themba lives for.

His brand “Themba Talks Mind” aims to guide youth through motivation, introspection, navigation and destination according to the Word of God. As a motivational speaker, youth life coach and ambassador Themba says he wants young people to know God’s love.

“Jesus loves them. He died for them.”

Themba says he was blown away by the response he received from people in various parts of the country.

When he first got the vision of “young South Africans coming together to pray as one”, Themba thought it was his own thinking.

Themba felt God saying: “In June you always celebrate fallen heroes but there is no commemoration of God as young people.”

Themba said he and other young people praying for the country understood what happened in 1976.

As an answer to this question Themba felt God impress upon him the prayer points he highlighted in the video.

Glorifying God
Themba said media and entertainment will continue to be a platform he uses to glorify God.

“This is just the beginning of what God has for me. I have so many dreams. I’m excited to do the will of God. I want to be a part of what God is doing full-on — without compromise.”

Following the response he received regarding the National Youth Day of Prayer, Themba said he is amazed at what God can do with one person.

“I want to share love, hope and God’s grace through this life. Transformation is going to take place in South Africa. Young people will stand in the gap and do things that have never been seen or heard before. God’s will be done.”

His name Themba Lethu means “our hope”. What hope he’s inspired in so many of us.

Themba can be reached either through his Facebook Page ThembaTalks_MIND or via email at: thembatalksmind@gmail.com