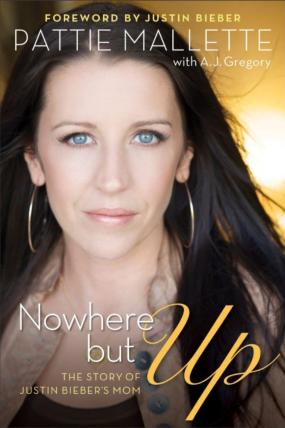 NOWHERE BUT UP:
THE STORY OF JUSTIN BIEBER’S MOM
By Pattie Mallete with A.J.Gregory

One of the reasons I am glad I read this book is that I now have a far better idea of just who Justin Bieber is. I was particularly pleased about this when I read of his recent AMA awards – which included Artist of the Year – and also of his interview with Oprah. Obviously I had been somewhat behind the times on current pop star trends.

But as interesting as this talented young man’s rise to fame has been, it is not particularly for insights into this that I would like to recommend the reading of this book, although I am sure for many it will be an appealing added dimension.

The story of Pattie Mallette certainly stands on its own as a tale to be told. It is the story of a girl growing up with the emotional damage firstly caused by a father who abandoned the family when she was a two year old, and then experiencing the horror of repeated sexual abuse while still a child.

These circumstances led, as they so often do, to teenage years full of emotional turmoil, rebelliousness, alcohol and drug abuse and sexual promiscuity. In Pattie’s case this led also to a suicide attempt and teenage pregnancy. But this is where the story becomes a testimony to our living God. Various events and relationships with godly people eventually resulted in her giving her life to Jesus as a very young adult. What follows is a wonderful account of a journey towards a greater meaning and purpose
that can only come about in a surrendered life.

Told with honesty, graciousness
This testimony to God’s greatness is told with remarkable honesty and graciousness. On occasion, Pattie describes exactly what she thought and felt along her spiritual journey, and it is not all sweetness and light. Rather, the harsh realities of struggles, disappointments and disillusionments are spelt out with brutal reality. And this for me is the appeal of such a book – although the circumstances of her life differed from mine, there was so much to relate to in her spiritual grapplings. I am sure this would be true for many readers.

But the story is also one of victory and triumph as Pattie grew into the role of mother, and was gradually able to overcome her emotional pain as she journeyed with God. And as mentioned before there is much graciousness in how Pattie tells of her transformed life. She does not see herself as a hard-done-by victim, but acknowledges completely the role of her own bad
choices and then gives glory to God for her greater wholeness and hopeful anticipation of things to come. In addition, she is most gracious and honouring about members of her family. She also talks well of Justin’s father (who she did not marry) in his role of father to Justin and his two other children and as her good friend. As part of her description of her tumultuous years, she had previously described their relationship as ‘toxic’. It is obviously important to her to acknowledge the restoration evident in this relationship, as in so many other aspects of her life.

There is a poignant account of her visit recently to the home where she stayed when she was pregnant. She relates how she saw on the faces of the young girls the same fear and uncertainty of the future that she could remember so clearly from her time there. She was not only able to give hope and inspiration to these young future mothers, but also see very clearly how much God had helped and blessed her in the ensuing years.

In conclusion, I would like to reiterate that I found this a very readable and worthwhile book. Sexual abuse of children is so prevalent that I feel we need as Christians to seek to understand as much as we can of what people who bear the scars of this evil endure emotionally. This well written book can certainly help with this. In addition, I think it would be a good read for teenage girls – the Justin Bieber connection would be a great incentive and there is much to be learned from this account of mistakes made and acknowledged, the painful consequences and then the intervention into Pattie’s life of our gracious and merciful God.

So mothers of teenagers girls in particular – how about making this a Christmas present and include with it the invaluable gift of your own time taken to read and discuss the book and its many lessons (as well as the talented and feted Justin!) with your daughter?